Family support for elderly under strain in Asia 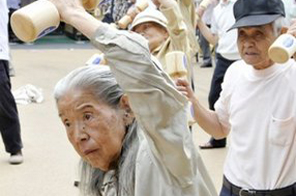 Elderly people work out with wooden dumb-bells in the grounds of a temple in Tokyo in 2009. Asia's tradition of supporting elderly parents is under strain as waning filial piety, rising individualism and a change in attitudes towards marriage force the aged to seek support elsewhere, experts said Monday. Source: AFP

SINGAPORE: Asia's tradition of supporting elderly parents is under strain as waning filial piety, rising individualism and a change in attitudes towards marriage force the aged to seek support elsewhere, experts said Monday.
They told a conference on ageing that this would present an opportunity for businesses catering to the needs of the region's burgeoning ranks of senior citizens.
Asia's elderly can no longer rely so much on their children to take care of them, said Kanwaljit Soin, president of Women's Initiative for Ageing Successfully, a Singapore support group.
"The elderly in Asia have traditionally relied on filial resources for old-age support, but the extent to which they can continue to do so has become increasingly uncertain," she told the Ageing Asia Investment Forum in Singapore.
"As extended family networks wane and more modern ideas about marriage, family and individualism take hold", the elderly "will have no other recourse but to turn to public or private institutions for support" she said.
The United Nations has forecast that the number of people aged 65 and above in Asia will more than quadruple from 201 million in 2000 to 857 million in 2050, potentially making Asia the world's "oldest" region.
Caring for one's elders has traditionally been a bedrock of Asian societies, with the old usually resisting efforts to put them in nursing homes.
But experts said that the change in approach towards the elderly represents opportunities as well as challenges.
"Longevity can be a source of prosperity and wealth... Ageing societies represent an opportunity for rapid job creation in health, retirement living and social services," Soin said.
Tony Bridge, chairman of Australia-based property consultancy Burnsbridge Sweett, told the conference there were "significant opportunities for innovation and leadership" in the ageing industry.
Bridge said society was becoming more accepting of the concept of letting institutions take care of the elderly.
He pointed to the growing popularity of retirement communities in Australia, where senior citizens live with their peers instead of their families in independent communes.
"Increasingly, there is recognition that the retirement community... is a bona fide form of accommodation and I think that there is evidence around Asia of many examples of where that is happening," he said.

#Family support for elderly under strain in Asia
Stay in touch!