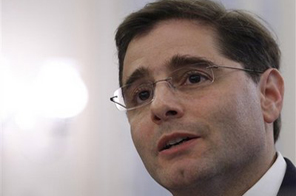 File - Federal Communications Commission Chairman Julius Genachowski testifies during his nominee hearing on Capitol Hill in Washington, in this June 16, 2009 file photo. Reports published Saturday Sept. 19, 2009 say Genachowski will propose new rules designed to ensure the free flow of information and applications over the Internet in a speech Monday at the Brookings Institution Source: AP

WASHINGTON: The head of the FCC plans to propose new rules that would prohibit Internet service providers from interfering with the free flow of information and certain applications over their networks, according to reports published Saturday.
The reports said the Federal Communications Commission chairman, Julius Genachowski, will announced the proposed rules in a speech Monday at the Brookings Institution, a Washington think tank.
The proposals would uphold a pledge Barack Obama made during the presidential campaign to support Internet neutrality and would bar companies like Verizon, Comcast or ATT&T, from slowing or blocking certain services or content flowing through their vast networks.
The rules would apply to all ISPs, including wireless service providers.
Without strict rules ensuring Net neutrality, consumer watchdogs fear the communications companies could interfere with the transmission of content, such as TV shows delivered over the Internet, that compete with services the ISPs offer, like cable television.
Internet providers have opposed regulations that would inhibit the way they control their networks, arguing they need to be able to make sure applications that consume a lot of bandwidth don't slow Internet access to other users.
The proposed new rules were reported by The Washington Post, The New York Times and The Wall Street Journal.
"We are concerned about the unintended consequences that Net neutrality regulation would have on investments from the very industry that's helping to drive the U.S. economy," Chris Guttman-McCabe, a vice president at CTIA, a wireless trade group, told the Post.