Former refugee to return to Vietnam as US Navy officer 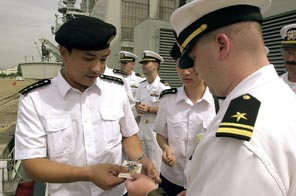 WASHINGTON: A US military officer who fled Vietnam as a boy and was picked up by an American ship will soon visit the country in command of a destroyer, the US Navy said on Friday.
Born in the Vietnamese city of Hue, Commander Hung Ba Le and his family were picked up at sea in 1975 by a US naval ship in the closing days of the Vietnam war, the Navy said on its website.
His family settled in Virginia and he later became a US citizen, graduating in 1992 from the US Naval Academy.
He is due to return to Vietnam in November with his ship, the guided missile destroyer USS Lassen, on a goodwill visit, the Navy said.
"This will be an incredible experience for me personally, to return to the land of my birth for the first time since I was a child," Le said in the Navy's report.
"My memories of Vietnam are very few, yet I still feel very drawn to it, to its culture, and to its people," he said.
It will be Le's first visit back to Vietnam since he was five years old -- when his family joined the wave of refugees fleeing after the fall of Saigon.
Le called the visit "a symbol of the friendship between our two nations."
The first Vietnamese-American to command a US naval ship, Le in April took over the helm of the USS Lassen, which is part of the US 7th Fleet based in Yokosuka, Japan.

#Former refugee to return to Vietnam as US Navy officer
Stay in touch!