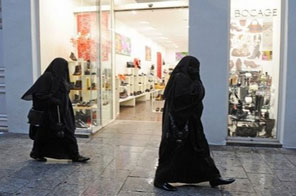 Women wearing the full islamic veil are seen shopping in Marseille. France was set to move one step closer to barring Muslim women from wearing the full Islamic veil with the release Tuesday of a report calling for a ban on the burqa in public institutions. Source: AFP

PARIS: France was set to move one step closer to barring Muslim women from wearing the full Islamic veil with the release Tuesday of a report calling for a ban on the burqa in public institutions.

After six months of hearings surrounded by fierce public debate, a commission set up by parliament will publish Tuesday its findings on outlawing the full-face veil.

It is expected to call the burqa an affront to French values and make 18 recommendations, including adopting a ban on wearing the full veil in "public services" including hospitals, schools and transport.

President Nicolas Sarkozy set the tone for the debate when he declared the burqa "not welcome" in France and described it as a symbol of women's "subservience" which cannot be tolerated in a country that considers itself a human rights leader.

Hopes for reaching any sort of political consensus have evaporated, with the opposition Socialists, divided by those calling for a total prohibition and those opposed to stigmatising wearers of the full veil, planning to abstain from the vote on the report.

The leader of Sarkozy's right-wing party in parliament, Jean-Francois Cope, has already presented draft legislation that would make it illegal for anyone to cover their faces in public for reasons of security.

Home to Europe's biggest Muslim minority, estimated at about six million, France is heading into unchartered territory. No European country has adopted sweeping national legislation on restricting the full veil.

Despite a large Muslim presence, the sight of fully-veiled women is not an everyday occurrence in France. Only 1,900 women wear the burqa, according to the interior ministry.

Half of them live in the Paris region and 90 percent are under 40.

French support for a law banning the full veil is strong: a poll last week showed that 57 percent are in favour.

While lawmakers are divided on the scope of the restrictions, with many fearing that a draconian law would stigmatise Muslims who are already bristling at the anti-Islam rants heard during the government's national identity debate, they agree that some time will be needed to craft a solid text that would stand up to a court challenge.

#France set to move towards burqa ban
Stay in touch!