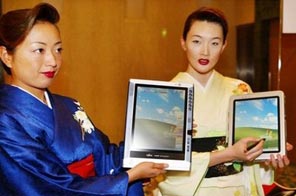 Fujitsu Ltd. said its US subsidiary launched a sleek multimedia device, which allows retail store clerks to keep inventory data and manage other business operations, in 2002.

The US unit made a trademark application for the name "iPad" with the US Patent and Trademark Office in March 2003, said Fujitsu spokesman Masao Sakamoto in Tokyo.

The application is still pending and has not been registered, he said.

Sakamoto said Fujitsu was yet to decide on how it may react after Apple's tablet computer was launched at a huge media event in San Francisco this week.

"As we are now sorting out the facts, we have not decided on what action we may take at the moment," he said.