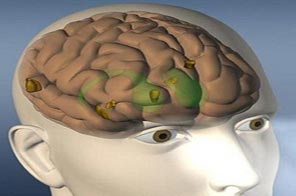 A gene therapy for Parkinson's disease that has been tested on lab monkeys is showing good early results in a small-scale trial on humans, French researchers said on Wednesday. Source: AFP

PARIS: A gene therapy for Parkinson's disease that has been tested on lab monkeys is showing good early results in a small-scale trial on humans, French researchers said on Wednesday.

The therapy entails taking three genes that produce dopamine, a key neurochemical that is depleted in Parkinson's. The genes are then inserted into a disabled equine virus that is then injected into the brain.

Six human volunteers began clinical trials a year ago, and the results are "extremely encouraging," as measured in control of Parkinson's symptoms and in side effects such as brain inflammation, neurosurgeon Stephane Palfi told AFP.

Another half-dozen volunteers are going to be recruited into the trial, said Jarraya, of the Henri Mondor Hospital in Paris.

If all goes well, a so-called Phase III trial, involving a large number of patients to assess the treatment for safety and effectiveness, would start from 2013.

The tentative trials on humans were authorised after three and a half years of experiments on macaque monkeys that had been given neurotoxins to replicate Parkinson's syndrome.

The monkey experiments are reported on Wednesday in the US journal Science Translational Medicine.

There was "80 percent recovery" among the animals, "and the results were stable for up to 44 years after treatment," said fellow neurosurgeon Bechir Jerraya.

Parkinson's is characterized by the loss of cells which produce dopamine, a critically important neurotransmitter that ferries chemical messages within the brain.

In approximately one third of cases it also results in dementia. The disease affects at least one percent of people over the age of 65.