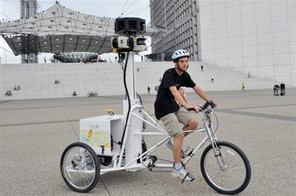 A French student employed by Google France, rides a tricycle fitted with cameras as part of the Google Street View project, in the financial district of La Defense, near Paris, in August. Switzerland's data protection commissioner has announced he is taking Google to court in a dispute over privacy concerns on the US Internet giant's "Street View" facility. Source: AFP

GENEVA: Switzerland's data protection commissioner on Friday announced that he was taking Google to court in a dispute over privacy concerns on the US Internet giant's "Street View" facility.

Federal Data Protection and Information Commissioner, Hanspeter Thuer, said in a statement that he was taking the case to the Federal Administrative Tribunal after Google had refused to apply the majority of measures he had recommended.

The Street View facility allows users to take a ground level panoramic view of some locations on Google Maps, based on still photographs taken by specially-equipped vehicles.

The Swiss data protection commissioner had repeatedly complained since the service was introduced in Switzerland this year that many images of faces and vehicle number plates were still easily identifiable and insufficiently blurred.

Thuer said on Friday that this was especially the case where the people concerned were shown around "sensitive locations, for example outside hospitals, prisons or schools."

He also raised concerns about the height of the car-top cameras Google uses to film locations, saying they afford a view over fences, hedges and walls "with the result that people see more on Street View than can been seen by a normal passer-by in the street."

"This means that privacy in enclosed areas (gardens, yards) is no longer guaranteed."

The data protection commissioner had issued recommendations in September after initially asking Google to withdraw the service while changes were made.

"In its written response on 14 October 2009, Google for the most part declined to comply with the requests," the statement said.

"For these reasons, the FDPIC (commissioner) has decided to take the matter further and to take legal action before the Federal Administrative Court."

Google has insisted on the efficiency of its blurring technology and insisted that it was "absolutely convinced that Swiss View is legal in Switzerland."