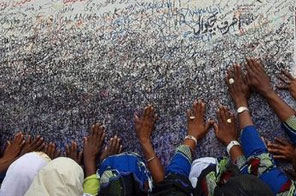 Muslim pilgrims touch a holy pillar on top of the Mount of Mercy (Jabal al-Rahma) in the plain of Arafat, southeast of the holy city of Mecca. Days before a forecast three million Muslim pilgrims pack Mecca to begin the holy ritual of the hajj, the spectre of a possible outbreak of swine flu seems to be fazing few of them. Source: AFP

MECCA: Days before a forecast three million Muslim pilgrims pack Mecca to begin the holy ritual of the hajj, the spectre of a possible outbreak of swine flu seems to be fazing few of them.

There might be posters in the streets, plastered on hotel facades and in their lobbies warning about A(H1N1) flu, but not many of the hundreds of thousands of pilgrims already jamming Islam's holiest city are wearing face masks and many say they are not worried.

"People are not paying too much attention to all these posters," said Ashraf Abu Nimr, a 26-year-old Algerian from France as he left the Grand Mosque in the city centre.

"Personally, I'm not worried at all," added Nimr, noting that he had received a swine flu vaccination before leaving home.

Saudi and world health authorities have been mobilising since May for the world's largest gathering since swine flu began spreading across the globe.

But so far, despite a number of cases, no one on the pilgrimage has died from the disease, health ministry spokesman Dr Khaled Marghlani said.

Saudi health officials are relaxed as they await the peak day of the hajj on Thursday November 26, when pilgrims gather at Mount Arafat, where the Prophet Mohammed gave his final sermon.

"The situation is under control and, God willing, it is very reassuring," Marghlani told AFP.

As of Thursday just 20 pilgrims had been diagnosed with the disease, according to the health ministry. Eight were undergoing treatment in hospital and the others had recovered.

Ibrahim Qanan, a Palestinian pilgrim, pointed to the fact that few people are wearing surgical masks in the street, even though the Saudi authorities have been distributing them to pilgrims.

"People are not talking about the H1N1 flu. They reserve their time for their devotions, and talk a lot about football," Qanan said.

Khaled, an Egyptian who lives in the holy city, said that he welcomes the pilgrims into his barber shop "without any fear of contamination."

Nevertheless, the Saudi authorities have mobilised massively to confront the threat as the swine flu pandemic sweeps the world unabated.

As of November 11, 70 people had died in Saudi Arabia from the disease and more than 7,000 proven cases had been recorded.

For the hajj, thermal cameras have been installed at air and sea terminals in Jeddah where most pilgrims arrive, some 15,000 health workers are deployed, and hospitals have hundreds of extra beds to handle any rise in illness.

The ministry also has mobile units which can instantly send to a central monitoring centre the locations of infections, to monitor outbreaks.

In Medina, Mecca and Jeddah, the government has also placed a number of special machines to identify the virus in suspected cases.

Pilgrims themselves seem confident that the threat is low.

"The pilgrims take care of themselves. We don't need all these facilities," said Umm Said, a woman from Mauritania.

"More than a million of us pray at the same time in the heart of the Grand Mosque in Mecca, and there is no sign of the disease," she said.

For her, the pandemic is "a lie from America, to trick people into buying the vaccine and to generate fear."

But Saleh, a Bahraini, admits he is a little nervous when he is swallowed up by the crowd.

"As soon as someone sneezes I turn my head," he said with a hint of fatalism.