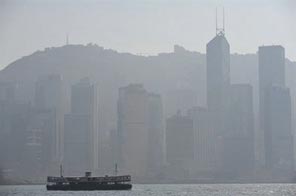 Hong Kong air pollution has equalled a record high registered in 2000, triggering a warning for people with heart or respiratory illnesses, according to the Environmental Protection Department. Source: AFP

HONG KONG: Hong Kong air pollution has equalled a record high registered in 2000, triggering a warning for people with heart or respiratory illnesses, according to the Environmental Protection Department.
A pall of smog hung over the city, restricting views across the world famous Victoria Harbour as pollutants built up due to a lack of wind.
Roadside air pollution readings reached a "very high" reading of 174 overnight in Central district, equalling a record set nine years ago.
When the index exceeds 101, "persons with existing heart or respiratory illnesses are advised to reduce physical exertion and outdoor activities", the department said.
Air pollution levels were forecast to remain very high Saturday.
The problem of air pollution in Hong Kong prompted Australia earlier this year to include a health alert in its advice to travellers to the southern Chinese city, warning that it could aggravate some medical conditions.
Pollution has in recent years become an increasing health and economic headache for the authorities in the city of seven million.
Emissions from the factory belt in southern China over Hong Kong's northern border combined with local emissions from power plants and transport to generate a thick haze over the city for large parts of last year.
The government has stepped up efforts to cut vehicle emissions, including offering tax concessions to users of environmentally-friendly hybrids.
The city's first locally-developed electric car debuted on Friday but the MyCar has only been approved for use on roads with a speed limit of up to 50 kilometres per hour (30mph), severely limiting its use, the South China Morning Post reported.