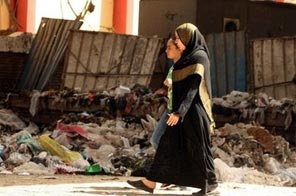 Egyptian women walk past accumulated garbage in Cairo. In their overcrowded areas, overflowing with litter, many Egyptians have trouble coming to grips with the dramatic measures taken by authorities to combat the A(H1N1) flu. Source: AFP

CAIRO : "Look, that's where the swine flu is going to come from," said a weary Marzouka Beshir, pointing to a pile of rubbish rotting under the blazing sun in Imbaba, a working class neighbourhood in Cairo.

In their overcrowded areas, overflowing with litter, many like this 52-year-old Egyptian woman, have trouble coming to grips with the dramatic measures taken by authorities to combat the A(H1N1) flu.

Over 900 cases of swine flu have been reported in Egypt, and two people have died from it.

But in a place where hygiene and basic services such as water and electricity are hardly guaranteed, simple instructions like "wash your hands with soap and water" as advised by the World Health Organisation (WHO) and hammered by public television, pose for most a serious challenge.

Egypt, whose 80 million people make it the Arab world's most populous country, is already struggling with the deadly H5N1 strain of bird flu, and says it is not taking the swine flu lightly.

The outbreak of the disease in other countries this past spring sparked a frenzy of combative measures by the Egyptian government.

Restrictions were placed on pilgrims travelling to and from Saudi Arabia, home to Islam's most important pilgrimage sites; schools and universities were shut down.

And the country's 250,000 pigs were slaughtered in a step that drew heavy criticism.

The government later said that culling the pigs -- an action deemed unnecessary by the World Health Organisation because pigs were not transmitting the disease to humans was a public hygiene measure aimed at cleaning up pig breeding in general.

But the pigs were feeding on organic waste. And now they are gone. The rubbish is piling up and the garbage men can't keep up.

The chronic problem of rubbish collection in the megalopolis of 18 million residents started getting worse after the decision.

And while there is no link between the rubbish and swine flu, the accumulation of waste certainly provides fertile ground for other diseases and discredits the government's public health warnings.

"It's a disaster; the pigs were eating the rubbish of all Egypt!," said Eid, 36, a freelance rubbish collector who, like many collectors, also sorted the rubbish for recycling.

Collector Said Mikhail, 74, smoking a shisha (waterpipe) at a local cafe, said "I used to have pigs. My children earned a living; all was going well. Now the pigs are dead and here I am.

"My children continue to pick up rubbish because they have no other means of making money, but the workload has increased and the revenue has gone down," he said.

Egypt produces around 55,000 tonnes of waste every day, including 15,000 tonnes in Cairo alone, official figures say.

In Saft al-Laban, a poor Cairo district, litter is everywhere, near the school, the fruit stalls and the small hospital.

A foul stench from metre-high (three-foot) piles of rubbish hovers over the area where residents can barely contain their fury.

"The smell is killing us," said Hala Shafiq from under her black veil.

"This, this is nothing," she said, shooting a look at the dozens of black plastic bags on the ground where dogs poked around looking for food.

"They talk about swine flu ... let them clean the streets," she said.

"We can't take it anymore," chimed in Mahmud Riad, who owns a nearby restaurant surrounded by debris.

"There are no dumpsters so people throw the rubbish in the street and when the authorities come to pick it up, they leave half of it," he said.

The government agency charged with cleaning up Cairo's twin city of Giza, admits it is swamped.

"We have neither the manpower, nor the equipment to pick up all the rubbish," said one official who asked to remain anonymous, as three street sweepers in green outfits dumped torn rubbish bags onto a truck already overflowing with litter.

"We are looking to recruit sweepers but people are ashamed of collecting rubbish," said the official.

The problem has prompted some to take things into their own hands.

Amina al-Bendari, who teaches history at the American University in Cairo, spent two hours with a few neighbours picking up the rubbish on their street.

"We are still paying the (freelance rubbish collectors), but they don't come every day anymore," she told AFP.

"They killed the pigs. What is the alternative now?"