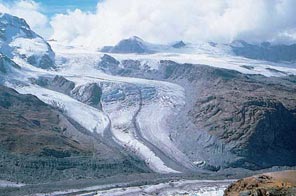 WASHINGTON: Dust in the wind is rewriting the cycle of life in the mountains. Throughout memory the warmth of spring has begun the mountain snowmelt, bringing life-giving water to greening plants so they can blossom and renew their species.

But now, scientists say, the timing is being thrown off by desert dust stirred as global warming dries larger areas and human activity increases in those regions.

This dust darkens the surface of winter snows, warming it by absorbing sunlight that the white surface would have reflected. That causes the snow to melt earlier than in the past, running off before the air has warmed enough to spur plant growth, researchers report in Tuesday's edition of Proceedings of the National Academy of Sciences.

"It is striking how different the landscape looks as result of this desert-mountain interaction," Chris Landry, director of the Center for Snow and Avalanche Studies in Silverton, Colo. and a co-author of the report, said in a statement.

The researchers established test plots in the San Juan Mountains in Colorado. Some plots were left alone to collect snow and dust naturally, others had extra dust added and a third group had naturally arriving dust removed.

On average, according to the study, cleaning away the naturally arriving dust delayed snowmelt by 11 days compared to the plots that were left alone. Adding dust speeded up the melt by 7 to 13 days.

Overall, dust levels in the mountains are about five times greater than they were prior to the mid-19th century, due in large part to increased human activity in the deserts, the researchers said.

And, the researchers added, climate change is likely to result in greater dust accumulation in the mountains as the Southwest warms and dries further.

With the change in timing of snowmelt and plant growth the composition of alpine meadows could change as some species increase in abundance, while others are lost, possibly forever, according to lead author Heidi Steltzer, a research scientist at Colorado State University.

The research was supported by the British Ecological Society and the U.S. National Science Foundation.