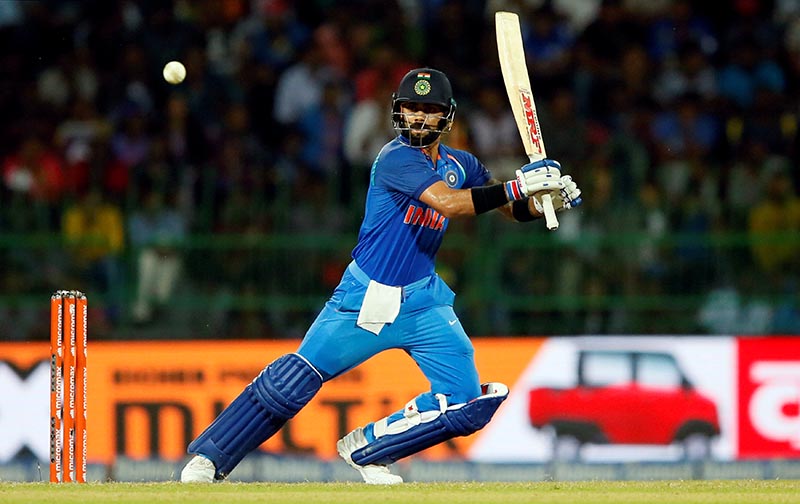 India's team captain Virat Kohli plays a shot. Photo: Reuters
DELHI: Several fans and a Mumbai cricket official have asked India to boycott their World Cup match against Pakistan in June this year after a suicide bomber killed 44 members of the Indian paramilitary police in Kashmir last week. On Thursday, a convoy of the Central Reserve Police Force (CRPF) was targeted by the bomber in an attack where Pakistan-based Islamist militant group Jaish-e-Mohammad (JeM) claimed responsibility. India and Pakistan have not played a bilateral series since 2013 but they have faced each other in tournaments such as the 2017 Champions Trophy and 2018 Asia Cup, both at neutral venues. They are scheduled to play in Manchester on June 16. "We condemn the terror activities carried out against our army and CRPF personnel," Cricket Club of India (CCI) secretary Suresh Bafna told Reuters partner ANI. "Though CCI is a sporting association but nation comes first, even before sports," Bafna added, asking for a boycott which got the support of several fans on social media. Acting secretary of the Indian cricket board (BCCI) Amitabh Choudhary could not be reached for comments but a boycott appears unlikely. The CCI, an affiliated BCCI unit, has covered a portrait of former Pakistan captain and the country's current Prime Minister Imran Khan in its Mumbai office. The Punjab Cricket Association has removed photographs of Pakistani cricketers inside Mohali stadium to "show solidarity with the nation", according to local media. Indian event management company IMG Reliance has pulled out of producing the ongoing Pakistan Super League (PSL) and television channel D-Sport has suspended the Twenty20 league's coverage in India. The Pakistan Cricket Board (PCB) on its website, expressed "extreme disappointment" with the outcome. "Denying India cricket fans the right to follow PSL...as well as covering or removing portrait of former Pakistan cricket captain and Prime Minister Imran Khan and other legendary cricketers from one of the most historic cricket clubs and venues are highly regrettable actions," PCB managing director Wasim Khan said. "The PCB intends to take up these incidents with the BCCI and the ICC (International Cricket Council) at the upcoming ICC committee meeting in Dubai later this month." India captain Virat Kohli sent his "heartfelt condolences to the martyred soldiers" on Twitter.
#India #International Cricket Council #BCCI #Central Reserve Police Force #Kashmir attack #Jaish-e-Mohammad #Cricket World Cup 2019 #Amitabh Choudhary #Wasim Khan
Stay in touch!