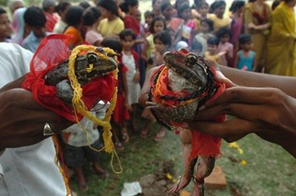 Frogs Raja (left) and Rani are married with full Hindu rituals in a ceremony to usher in the delayed monsoon rains, near Futala Basti in the city of Nagpur, some 860 kilometres (530 miles) east of the Maharashtra state capital Mumbai. Source: AFP

MUMBAI: Two frogs have been "married" in a ceremony in the western Indian state of Maharashtra to usher in the delayed monsoon rains, according to a report.
Residents in a suburb of Nagpur, 860 kilometres (530 miles) east of the state capital Mumbai, looked on as the groom, Raja, and bride, Rani, were joined in union in a solemn ritual at the weekend, the Times of India said.
Tradition dictates that if frogs are married off with full Vedic or Hindu rituals, the rain god is pleased and the heavens will open within days. Similar ceremonies have been held across the country.
Indians have been watching the skies anxiously after the monsoon failed to appear two weeks ago, prompting concerns about the impact on agriculture and water supplies as lakes run dry after a long, hot summer.

#Indian frog 'marriage' to bring on monsoon
Stay in touch!