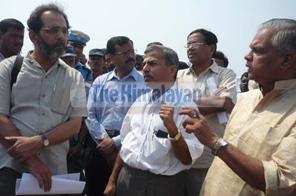 KATHMANDU: Bijendra Prasad Yadav, Minister of Water Resource of Government of Bihar along with the senior officials from India and Nepal made a joint inspection of Koshi breach closure works on Thursday.

The high level joint inspection team expressed satisfaction over the timely completion of the work and appreciated the hard work put in by the team of engineers and the workers.

The statement released by the Indian embassy said diverting the flow of water away from the breach and undertaking the restoration of the afflux along with recommended protection works were challenging tasks. The joint efforts of the Government of India and the Government of Nepal made it possible despite the frequent bandhs and agitations which threatened to delay the completion of the works, added the statement.

The statement further said that the Koshi breach closure works were undertaken by the recommendations made by Koshi Breach Closure Advisory Team (KBCAT) under the leadership of former engineer-in-chief, Water Resources Department, Government of Bihar and N. Sanyal, the chairman of Ganga Flood Control Commission.

The breach closure works were scheduled to be completed by June 1, 2009 as per the recommendation plan prepared by KBCAT. KBCAT had held a discussion about the plan with the Nepali authorities as well.

The river had breached large swathes of the embankment at Paschim Kushawa in Sunsari during a devastating flood in August last year.