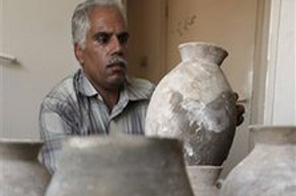 In this photo taken Monday, June 22, 2009, a worker of the Palestinian ministry of Tourism looks at pieces of pottery that were from the early Bronze age and were found recently in the West Bank town of Bethlehem. Source: AP

BETHLEHEM: Workers renovating a house in the traditional town of Jesus' birth accidentally discovered an untouched ancient tomb containing clay pots, plates, beads and the bones of two humans, a Palestinian antiquities official said Tuesday.
The 4,000-year-old tomb provides a glimpse of the burial customs of the area's inhabitants during the Canaanite period, said Mohammed Ghayyada, director of the Palestinian Authority's Ministry of Tourism and Antiquities.
Workers in a house near the Church of the Nativity uncovered a hole leading to the grave, which was about one meter (yard) below ground, he said. They contacted antiquities officials, who photographed the grave intact before removing its contents.
They dated the grave to the Early Bronze Age, between 1,900 B.C. and 2,200 B.C.
Jerusalem-based archaeologist and historian Stephen Pfann called the find "an important reference to the life of the Canaanites," adding that it could give a glimpse into life in the area before the time when the Biblical patriarchs are said to have lived.
While many artifacts exist from this period, intact graves are rare, mainly because of looting, he said.
Intact graves are more useful to scholars because they show how items were arranged.
"Every time a new tomb is found, it adds to the picture," Pfann said.
The findings will be housed in the Bethlehem Peace Center, a cultural center not far from where the tomb was discovered.