By John Hooper / The Guardian 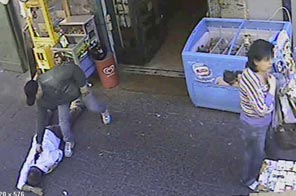 ROME: A 13-year-old Italian girl learned that her father had been murdered when a video of the killing was sent to her mobile telephone, her family said today.
Mariano Bacioterracino was shot outside a bar in Naples on 11 May in what is thought to have been a "hit" organised by the Camorra, the Neapolitan mafia. Although CCTV footage of his death clearly showed the faces of the killer and his suspected look-out, prosecutors have been unable to trace either.
Investigators released the video on Wednesday in the hope someone might lead them to the killers. But Bacioterracino's sister, Pasqualina, said today his daughter, Lucia, had already seen the footage of her father's death, days after the shooting.
She said it was not known who sent the video to her niece, but speculated that someone connected with the killing may have been seeking an extra measure of revenge. Her disclosure raised fears that the murderers had access to evidence collected by the investigators.
The murdered man had served time in jail for robbery, but his sister denied he was a Camorra mobster.
Not the least shocking aspect of the footage is the behaviour of passersby. A woman just feet away when the shooting takes places walks off calmly. People step over Baccioterracino's body apparently unconcerned. Another woman half-turns him to get a look at his face, apparently to see if he is someone she knows, and then walks on.
Some Italians questioned the wisdom of disseminating the video of a real murder. It was shown without warnings on some websites and TV news bulletins. Marcello D'Orta, a well-known crime novelist, called it "very negative" and warned the killers "could become like heroes for the young". The victim's sister guardedly backed the decision, saying "We hope this torture [for the family] achieves something."