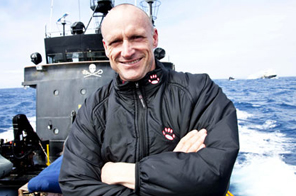 LONDON: New Zealander Peter Bethune could face a lengthy jail term over charges brought after he boarded a Japanese whaling ship Prosecutors today indicted an anti-whaling activist from New Zealand on charges that could lead to a lengthy prison term after he boarded a Japanese harpoon boat to protest at the ship's whale-hunting expedition in Antarctic seas.
Peter Bethune had jumped aboard the Shonan Maru 2 in February during the annual face-off between whalers and their opponents with the stated goal of making a citizen's arrest of the captain, while handing over a £2m bill for the destruction of the Sea Shepherd protest ship a month earlier.
The 44-year-old was held on board and arrested on 12 March immediately after the ship returned to Japan. He has since been in custody in Tokyo.
On Friday the Tokyo district public prosecutors office charged Bethune, of the US-based group Sea Shepherd conservation society, with five criminal counts: assault, illegal possession of a knife, destruction of property, obstruction of business and trespassing.
The move comes a day after Japan's coastguard added a set of new allegations against Bethune, which were reflected in the indictment, according to a spokesman for the coastguard, Tatsuya Fujino.
Assault and business obstruction each carry a prison term of up to 15 years or a fine up to 500,000 yen (£3,500). His initial trespassing allegation can bring a prison term of up to three years or a fine up to 100,000 yen.
Bethune's Japanese lawyers declined to comment.
Sea Shepherd described Bethune as a "political prisoner" yesterday, when it released a statement on its website after it learned of the impending indictment. The group expected a trespassing charge against Bethune but denounced the other four.
"These charges are bogus, and Sea Shepherd conservation society questions the credibility of the entire Japanese judicial system for entertaining such absurdities," the statement read.
Japan's annual whale hunt is allowed by the International Whaling Commission as a scientific programme, but opponents call it a cover for commercial whaling, which has been banned since 1986. Japan hunts hundreds of mostly minke whales, which are not an endangered species. Whale meat not used for study is sold for consumption in Japan.
The Sea Shepherd sends vessels to confront the fleet each year, trying to block the whalers from firing harpoons and dangling ropes in the water to try to snarl the Japanese ships' propellers. They also hurl packets of stinking rancid butter at their rivals. The whalers have responded by firing water cannon and sonar devices meant to disorient the activists.
The group described its efforts this year as its most successful Antarctic campaign against Japanese whalers.