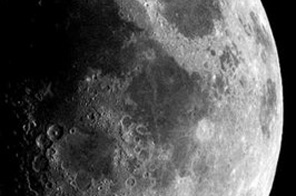 Japan's first lunar satellite has ended its scientific mission which started in September 2007 and was manoeuvred to crash onto the moon, the nation's space agency said. Source: AFP

TOKYO: Japan's first lunar satellite on Thursday ended its scientific mission which started in September 2007 and was manoeuvred to crash onto the moon, the nation's space agency said.

The Kaguya, named after a mythical moon princess, was launched to study the moon's origin and evolution by collecting data as it orbited 100 kilometres (60 miles) above the moon, the Japan Aerospace Exploration Agency (JAXA) said.

The mission by the three-tonne orbiter, also known as the Selenological and Engineering Explorer, or SELENE, was the most extensive mission there since the US Apollo programme, JAXA said.

"We will now fully analyse the massive volume of data collected by Kaguya and do our utmost to help the advancement of lunar science," Susumu Sasaki, the project manager, said in a statement.

In addition to studying the geology and gravity levels of the moon, the probe sent back to Earth spectacular, high-resolution pictures and video, which JAXA said it plans to publish online from November.