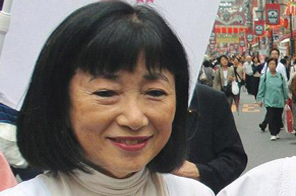 TOKYO: Japan's first lady Miyuki Hatoyama, who has made headlines with tales of her alien encounters, drew fresh media attention on Monday -- for being a fashion ambassador for humble blue jeans.
The 66-year-old wife of Prime Minister Yukio Hatoyama won the oddly named "Best Jeanist Award," a prize given to denim-clad celebrities, together with musicians and artists including Taiwan actor Jerry Yan.
Miyuki "is wearing jeans in a classy but revolutionary style," industry group the Japan Jeans Association said, saying the first lady, who is also a TV lifestyle guru, projects a positive spirit representing true denim style.
Miyuki said she and her husband were wearing jeans when they first met in California while he was studying at the prestigious Stanford University. They married in 1975 after she divorced her previous husband.
"This is the prize I have long wished to win," Hatoyama told a press conference, wearing traditional blue jeans. "I'm a jeans lover. I'm always putting on jeans as they're easy to wear."
Miyuki has previously said her soul once travelled to Venus on a triangular-shaped UFO, in a book published last year. Dubbed "Mrs Occult" by Time magazine, her colourful remarks have made headlines as far afield as India, Israel, Britain and the United States.
Taiwanese star Jerry Yan won the international competition, while Japanese pop singer Koda Kumi, popular at home and across Asia, was awarded the general competition prize.
Among other Japanese winners were KAT-TUN boyband member Kazuya Kamenashi, girl band SPEED and rock and roll signer and TV celebrity Daigo.
The award, co-sponsored by the Jeans Association and the economy, trade and industry ministry, marks the beginning of the Tokyo Fashion Week that will be held in the Japanese capital until October 25.