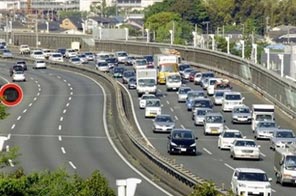 A traffic jam snakes its way through Tokyo. Source: AFP

"As a mid-term goal, we aim at a 25 percent reduction by 2020 from 1990, based on the levels demanded by science to stop global warming," said Hatoyama, who is due to take over as prime minister on September 16.

Japan would present its target at international talks in Copenhagen in December aimed at agreeing a follow-up treaty to the Kyoto Protocol which expires in 2012.

Japan is the world's number two economy and the fifth largest emitter of greenhouse gases which are blamed for raising global temperatures, melting the earth's ice caps and glaciers, and changing weather patterns.