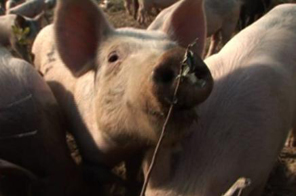 SWOOPE: A diehard activist for some, a pioneer for others, Joel Salatin is fighting against America's genetically-modified foods and for local subsistence farming.
Leading his crusade from the heart of the Shenandoah Valley in the foothills of the Appalachian Mountains, this anti-globalization messenger who dubs himself a "Christian Libertarian environmentalist capitalist lunatic farmer" has become the face of healthy eating and agriculture.
"The desire from consumers to eat this kind of food is exploding," Salatin said at his 500-acre (200-hectare) farm in Swoope, Virginia.
Small farmers' markets -- still scarce just a few years ago -- are now in full swing in the United States.
The online Farmers' Market Directory lists 5,274 markets across the country, a 13 percent rise from 4,685 a year ago. The number has grown by nearly 4,000 nationwide since 1994.
"Nobody trusts the industrial food system to give them good food," said Salatin, surrounded by the many cows, pigs, turkeys, rabbits and chickens he raises in methods that remain unconventional in the highly-industrialized US agricultural sector.
"The distrust is very real."
An iconoclast who has authored several books with titles like "Everything I Want to Do is Illegal," Salatin makes regular media appearances and now spends a third of his time at conferences.
But farming is still a family affair built over three generations on the rocky terrain of his "Polyface Farm".
Chickens and turkeys run free here, transported in a chicken coop built on wheels to a different pasture every three days.
The 1,000 cows and 700 pigs raised for meat each year change pastures every week.
Salatin, 53, hails his "healing farming" method, where each animal plays an environmental role.
"The cows shorten the grass and the chicken eat the fly larvae and sanitize the pastures. This is a symbiotic relation," he explained.
This natural approach to farming is just as profitable as industrial farming, Salatin insists, because he saves where big chicken and beef producers are forced to invest in structures, drugs and labor.
His customers are 400 families, about 50 restaurants and a dozen shops in the area. He also charges 800 dollars for a two-hour tour of his farm.
"Yes, the prices are higher, but it's because all of the costs are in the price of this chicken and you are paying it here at the cash register, not paying it in sickness and disease and pollution and stink," he explained.
But his unorthodox methods leave some thinking Salatin is a "terrorist", he claimed, "because the new word is science-based agriculture and this is not science-based."
Salatin's products are not certified as organic -- a booming food sector in the United States, now accounting for 3.5 percent of all food sales -- because he refuses to do the necessary inspections and paperwork.
"We are beyond organic," exclaimed Salatin, observing that government-certified organic meat products do not necessarily come from chicken and cows on pasture.
"Organic doesn't mean what people think it means."