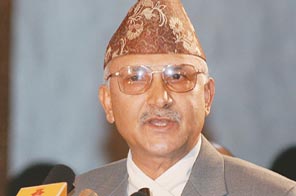 KATHMANDU: Senior leader of CPN-UML, KP Sharma Oli, assured the main opposition party UCPN-Maoist of prestigious posts if they joined the government. In a tea reception organised by his faction of UML led by himself in the capital, Oli suggested the UCPN-Maoist quit its scheduled protest programmes and look for consensus to address its demands. He further claimed that they would be abandoned by the citizens in their protest programmes. He also warned that the government would retaliate in a stern manner to cope with their protest programmes if they turned violent.

The disgruntled faction led by KP Sharma Oli of the UML today organised a tea reception in the capital on the occasion of Nepal Sambhat. A similar reception was organised by the faction of UML chairman Jhala Nath Khanal on Friday in the capital. Meanwhile, Prime Minister and UML leader Madhav Kumar Nepal skipped both the programmes though he was invited as the chief guest.