Kenya rainmakers called to the rescue 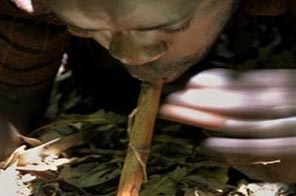 Kneeling in the dank shade of a small coppice near Maseno in western Kenya, Alexander Okonda blows through a reed into a pot embedded in a tree hollow and containing a secret mixture of sacred water and herbs. "This contains so much information. It is something I feel from my head right down to my toes," says Alexander, after completing his ritual. Source: AFP

MASENO: Long vilified as sorcerers, Kenya's Nganyi rainmakers -- with meteorological equipment consisting of trees, pots and herbs -- are being enlisted to mitigate the effects of climate change.

Kneeling in the dank shade of a small coppice near Maseno, in western Kenya, Alexander Okonda blows through a reed into a pot embedded in a tree hollow and containing a secret mixture of sacred water and herbs.

"This contains so much information. It is something I feel from my head right down to my toes," says Alexander, after completing his ritual.

The young man is a member of the Nganyi community, a clan of traditional rainmakers that for centuries has made its living disseminating precious forecasts to local farmers.

The croak of the frog, the movement of the termites, the leafing of certain trees all carry information, the interpretation of which the Nganyi have transformed into a ritual art hovering between legend and science.

"This skill is in the family, it runs in our blood. When I was a six-year-old boy, I could already feel so many things," Alexander explains.

The Nganyi's fame was sealed when his great-grandfather -- "the greatest rainmaker in the family" -- was detained in the 1910s by the British colonial authorities who believed he was responsible for poor rainfall.

He had 30 wives and was buried in a sitting position with a rainmaker's pot on his head in a site near the western town of Kisumu which is now one of the main natural "shrines" used by his descendants to concoct their forecasts.

Modernisation slowly eroded the community's aura but the Nganyi have recently been offered a way of reviving their traditions through a project aimed at using indigenous knowledge in disaster prevention.

Funded by Britain and Canada, the programme brings the Kenya Meteorology Department (KMD) and traditional rainmakers together to produce more accurate forecasts and disseminate them to a wider number.

"We knew that we had good scientific forecasts but that many people didn't believe them," explains Gilbert Ouma, a meteorologist from Nairobi University.

More than the variation in the volume of rainfall, the consequence of climate change that many African communities suffer from the most is the disturbance in the cycle of rainy seasons.

Delayed or early rains upset planting that had taken place at set dates for decades, with devastating effects on yields, as exemplified by the searing drought currently bringing millions in east Africa to the brink of starvation.

At a gathering hosted by Maseno University last week, Nganyi elders and KMD scientists compared forecasts for the coming months.

After conferring with the heads of the community's sub-clans, chief predictor Obedi Osore Nganyi, a wiry old man with a greying scraggly beard and cloudy eyes, stands in front of the congregation.

"There will be heavy rains in October through November. The decrease will start in the second week of December and rains will cease by mid-January," he says, charting rainfall curves in the air with his hands.

The official from the Kenya Meteorology Department, whose own previously undisclosed forecast is strikingly similar, nods quietly, looking slightly bemused.

Ouma explains that traditional prediction methods have their limitations and that the project's main goal is to produce a consensus forecast that can be disseminated through indigenous channels.

If smallholders are given access to information they trust on increasingly confusing weather patterns, they can adapt by planting earlier or later or by switching to a more drought-resistant seed.

"This project is part of an early warning system... We are helping people to adapt to climate change," Ouma says.

Each forecast meeting includes workshops where the local authorities are invited to draft an adequate response, for example by bracing for anything from a surge in flood-induced malaria or drought-related theft.

When the elders stand and speak in their local dialect of the magic of their art, which involves the sacrifice of animals and libations in secret forest shrines, a few smirks and giggles are repressed in the attendance.

But Ouma, a PhD meteorologist, doesn't dismiss the Nganyi's art altogether and argues that what may seem to some like primitive hocus-pocus contains a wealth of untapped scientific information.

"We have zoologists and botanists looking at some phenomena... For instance, the Nganyi in their predictions use trees that start putting leaves shortly before it rains," says Ouma. "There may be a process worth analysing there."

Doctor Maria Onyango, of Maseno University, explains that the Nganyi have for generations been the country's only full-time rainmakers, acquiring a bank of knowledge that cannot be ignored.

"Most of what is in their predictions can also be observed scientifically," she explains.

Both the scientists and the Nganyi also see this joint venture as a way of rescuing a local culture from oblivion by restoring the rainmakers' role in society, albeit with the help of modern-day technology.

In olden times the Nganyi used to be paid with bags of sorghum and millet harvested by neighbours who had benefitted from their predictions but modernisation gradually saw them being ostracised as backward charlatans.

"It (the project) has enhanced their image in the community," Onyango says. "People used to look at them as witches, they didn't think something positive could come out of it."

Nganyi community chairman Abunery Osango concurs: "Our knowledge was hidden but thanks to the scientists, it is spreading... it is being used."

#Kenya rainmakers called to the rescue
Stay in touch!