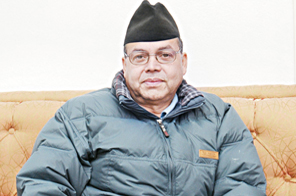 Media had reported that Dahal and Koirala during a meeting at the Singapore hospital agreed to form a new government under the leadership of the former rebels and replace the present government. While the leaders of the both parties-NC and UPCN (Maoist) have been saying that the duo had agreed to form a high-level political mechanism to resolve the political deadlock, many media houses unveiled a controversial taped conversation between the duo. As per the conversation the duo agreed to topple the present government and form a new one under Dahal’s leadership. The controversial tape further claimed that Dahal proposed NC president Girija Prasad Koirala as the next President of the country which would resolve their demands on ‘civilian supremacy’.
Addressing a programme in the capital Khanal made it clear that the report was just a rumour and unauthentic. He also described the controversial tape of Koirala and Dahal's meeting in Singapore as a hoax. He claimed that discussion was based on forming a mechanism which would resolve the entire political standstill.
In another context Khanal downplayed the demands of some of his party members for him to resign from the post of party chairman. However he claimed he would set an example in the party’s history by working in favour of the party’s image.