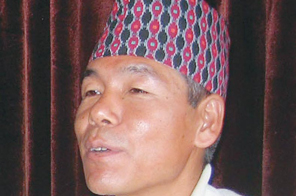 KATHMANDU: Consensus to clear the present political crisis would be possible if the environment which would ensure that the President would not be able to make any 'unconstitutional move' like in the case of the former CoAS is created, UCPN-Maoist leader and CA lawmaker Dev Gurung said during an interaction programme in the capital on Wednesday.

Mentioning that his party was in favour of consensus Gurung said his party was ready to show extreme political flexibility for it. However, he reiterated that the common proposal should address the President's move, no matter how. Gurung assured that the task force formed by the big three parties was approaching consensus but everyone needs to wait for it as he was not able to reveal when it would happen.

Defending the President's move Nepali Congress spokesperson Arjun Narsingh KC in the same programme said that the President had not committed any mistake on the issue of the former CoAS. He made it clear that his party was not in favour of carving consensus by breaching the legal norms.

Another speaker in the programme UML leader Yubaraj Gyawali said that they were on the brink of drafting the common proposal with hectic discussions on the content of the proposal. Gyawali opined that it was pointless to take up minor issues when the constitution drafting process was yet to be accomplished. He suggested that everyone overlook past incidents and instead discuss the political scenario developed in the status quo.

The task force which comprises the above speakers Dev Gurung (UCPN-Maoist), Arjun Narsingh KC (NC) and Yubaraj Gyawali (UML) formed by the three big parties held a meeting on Tuesday evening at the UCPN-Maoist PP office in Singha Durbar. But the meeting ended without any concrete decisions and was postponed to Thursday. However, leaders said that Thursday’s meeting would give final touches to the common proposal.