Lynxes get second lease of life in Spain 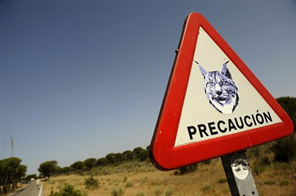 A road sign warning to watch out for lynxes at the Donana National Park Source: AFP

DONANA NATIONAL PARK: Road signs throughout the vast Donana National Park, a UNESCO World Heritage Site in southwestern Spain, warn drivers to watch out for lynxes.
But there is little chance of spotting a member of the world's most endangered feline species, although collisions with vehicles are a risk.
Less than 50 of the creatures are believed to roam the park's 335 square kilometres (134 square miles) of scrubland, forests and marshes, one of the two remaining pockets of Spain where the Iberian lynx is known to survive in the wild.
At the start of the 20th century there were around 100,000 in Spain and Portugal.
But urban development, hunting and, most of all, a dramatic decline due to disease in the number of wild rabbits, the lynx's main prey, meant that barely 150 remained in the wild in 2002.
And the spotted cats, which can grow to about one metre (three feet) long and weigh about 15 kilogrammes (33 pounds), were in danger of being the first feline species to become extinct since the sabre-toothed tiger 10,000 years ago.
In a compound within the park, veterinarian Astrid Vargas has been running a captive breeding programme for the past five and a half years to bring the Iberian lynx back from the brink of extinction -- and with remarkable success.
Vargas, an American from Puerto Rico, began the programme in December 2003 with five adults in Donana, four females and a male.
Last month, a total of 17 surviving cubs were born in captivity in Donana and in another breeding centre in La Olivilla, in Jaen province in south-central Spain, the most since the programme began.
There are now 77 lynxes in captivity at the two centres run by Vargas and in the zoo in the southwestern city of Jerez.
Vargas, who also holds a PhD in conservation biology, said she has now reached her goal of 30 adult males and 30 adult females necessary to begin reintroducing the species to the wild.
"We are now two years ahead of schedule of the growth projections for the captive breeding progamme. The next big challenge is to prepare the captive-born animals for their survival in the wild," she said.
The plan is to begin releasing a few animals next year into areas where they were at one time abundant.
In addition, in a separate but overlapping programme, some of the lynxes in the wild are to be translocated to new areas later this year.
"The idea is to form a sort of rosary of sites where the animals have corridors that allow exchanges between populations," said Vargas, while admitting this was near impossible due to urban development.
-- We invest in one species to help a whole ecosystem -- Two more breeding centres are also planned, in southern Portugal and in western Spain's Extremadura region, to cope with the growing numbers.
In Donana, the captive animals live in a fenced compound with 20 separate enclosures, where they are fed mostly rabbits, including live ones so the cubs can learn to hunt.
In a small building nearby, Vargas and her team of experts monitor them 24 hours a day using 57 closed-circuit television cameras.
Vargas glanced across nervously at her charges on the screens as she conducted this interview.
"Oh, the poor things are so hot today!" she said, as she watched three cubs desperately fighting off mosquitos in the baking 43-degree C (110 F) heat.
"We try to intervene as little as possible, except when they fight," she said, noting that one of the first surviving set of cubs was killed in a fight with a sibling in 2005.
Suddenly, there is a crisis as a cub is seen climbing the fence, and head keeper Juana Bergara races out the door to stop the animal from falling to the ground and hurting itself.
All the animals have names, the first letters of which correspond to the year in which they were born, from Adela and Aliaga in 2004 to Fresno and Fernandina this year. Their different personalities, from aggressive to calm, are also recorded on a chart on the wall.
Vargas, who has worked on saving the black-footed ferret and the Mexican wolf in the United States and the Siberian tiger in Russia, said the work is "satisfying and very terribly tiring".
"When you are responsible for a lot of live animals that are critically endangered you never disconnect. It's day and night." The captive breeding programme is just the start of a process that could take another 16 years and in which the Iberian lynx must pass from being "critically endangered" -- the highest category of risk for a wild animal under the International Union for Conservation of Nature -- to "endangered" to "threatened".
And Vargas explained that this is also just part of a wider project.
"Our ultimate very important goal is that we are not working on one single species, we are working on the protection of an endangered habitat, which is the Mediterranean forest and scrubland, and we are using the lynx as the ambassador.
"So we are investing in one animal for the well-being of a whole very important ecosystem that has been hammered for 20 years. It's what is called an umbrella species, because by protecting one species we are protecting a whole area." Among other threatened species in the Donana National Park is the Spanish imperial eagle.
It may be many years before you can catch sight of an Iberian lynx in the wild. But the animals can be viewed by the public live online at http://icts.ebd.csic.es.

#Lynxes get second lease of life in Spain
Stay in touch!