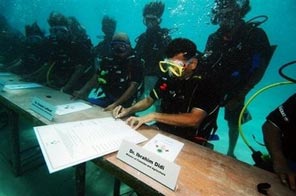 Maldives Presidency issued photo shows members of the Indian Island nation's government undertaking an underwater cabinet meeting. The Maldives, which is one of the nations most vulnerable to rising sea levels, has asked fellow endangered states to go carbon neutral and lead a drive to reduce global warming. Source: AFP

MALE: The Maldives, which is one of the nations most vulnerable to rising sea levels, on Monday asked fellow endangered states to go carbon neutral and lead a drive to reduce global warming.

Maldivian President Mohamed Nasheed opened a two-day conference here on climate change urging smaller countries, which are faced with the prospect of being wiped out, to adopt environmentally-friendly energy.

"A group of vulnerable, developing countries committed to carbon neutral development would send a loud message to the outside world," Nasheed said, adding that they needed to make a commitment to carbon neutrality.

Nasheed, 52, called the meeting of 11 of the world's least polluting smaller states, including Kiribati and Barbados, in a bid to hammer out a common stance ahead of the United Nations climate summit in Copenhagen in December.

"If those with the least (pollution) start doing the most, what excuse can the rich have for continuing inaction?" he asked. "We know this is not an easy step to take, and that there might be dangers along the way.

"We want to shine a light, not loudly demand that others go first into the dark."

Last week, the Maldives flagged off construction of a 200-million-dollar wind farm as part of efforts to make the low-lying archipelago carbon neutral by 2020.

The wind turbine facility on a small islet just north of the capital Male is expected to be completed within 20 months, an official said, adding that it would supply more than half the nation's electricity needs.

Nasheed, whose cabinet met underwater last month in a stunt aimed at highlighting the Maldives' vulnerability to rising sea levels, said he wanted the country to be a showcase for renewable and clean energy.

Being carbon neutral normally means reducing emissions of greenhouse gases where possible and offsetting or compensating for any others that cannot be eliminated.

In 2007, the UN's Intergovernmental Panel on Climate Change warned that an increase in sea levels of just 18 to 59 centimetres (seven to 24 inches) would make the Maldives virtually uninhabitable by 2100.

More than 80 percent of the tiny nation, famed as a tourist paradise because of its secluded beaches, coral reefs and white-sand beaches, is less than a metre (about three feet) above sea level.