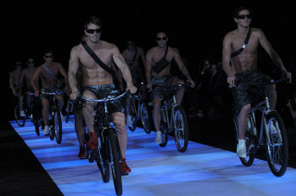 PARIS: The same scene replays twice a year each year in Paris and Milan. Young men in skinny jeans and the latest sneakers and T-shirts line up at top fashion houses hoping for a flush catwalk job.
At the venerable house of Ungaro on a sunny day in June, designer Franck Boclet and his trusted assistant Damien Amsallem turned up early to work for the label's 24-hour "casting" -- finding 15 male models with the right look and right body to carry off their new collection to catwalk perfection at Paris Fashion Week, starting Thursday.
"There are lots of candidates this year," said Amsallem ahead of the June 25-29 Paris Men's Fashion. "It must be the crisis. Even models who've done major advertising campaigns for perfumes like Chanel are looking for work." In all more than 100 young men from London, Moscow, Tokyo, Paris and elsewhere turned up, crowding corridors and milling on stairs clutching press-books and lists of the several dozen other Paris designers casting for models that day.
"It's one casting after another," said Montreal model Felix Bujo. "You run around from house to house looking for work and eat on the hop. This is our life, travelling the world from one fashion week to another looking for jobs." It was no go for him at Ungaro's however. Nor for 20-year-old six-foot-one design student Harvey Newton-Haydon and six-foot-three history student Jamie Conday, both fron Britain.
"This is our first try at modelling," said Harvey. "We have to get to Dior and Prada. They're casting this afternoon, but we don't know our way around." Ungaro's Boclet first and foremost was on the look-out for twins. "There are four lots of twins listed with the modelling agencies," he said. "But so far I've found just one pair." Why twins? "My designs are based on duality," Boclet said. "I hate people who dress as if they have a single personality. I want to show a man as a dandy in a suit and as a rocker in leather, highlight both sides of his personality." Lining up as a duo were 23-year-old twins from Portugal, Jonathan and Kevin Ferreira de Sampaio, former physical education students spotted at university two years ago by a fashion talent scout and hired by Dolce & Gabbana in 2007.
The pair, who have never looked back since, epitomise the new boy on the catwalks, not the big beefcake type but a man with some muscles and a physique, unlike the chicken-chested undernourished sexually-ambivalent figure all the rage in the early 2000s.
"We plan to go back to university soon but for now have work," said one of the brothers, paid anything from a minimum 500 euros to several thousand for a show, which is way less than women models.
After marking down the twins for two of his 15 slots on offer, Boclet ushered in candidates one after another, checking their portfolios and briefly saying hello.
"No! No! No! Too Latin. Too classical good looks!" he said after waving off a couple of extremely good-looking young men. "I'm not looking for perfection. I want boys who aren't too beautiful or too ugly." Bastien Bonizec, a tall skinny 18-year-old with a shock of long red hair, caught his eye and was asked to "try on a jacket and walk".
"Fine, take his picture," said Boclet, laying the photograph alongside other pre-selected candidates.
"Some of the boys are way too slim, they barely look like adults, but I need them to fit perfectly into a size 48 jacket," said the designer. "Others don't have thighs, they work on their upper bodies but not on their legs." Setting the pictures on the desk side-by-side, Boclet and Amsallem weeded out faces to assemble 15 types who as a group would best show off the label's spring-summer collection.
"We've got three red-heads, two blond men, the twins have brown hair and we have a dark-haired Asian. Let's find some more red-heads," said Boclet.
By the end of the day, Ungaro had two pairs of twins and five red-heads among the 15 male models selected to sashay in the designs.