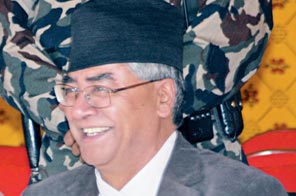 BARDIYA: The main opposition party UCPN-Maoist is yet to salvage the reputation that it has built during the decade long insurgency in the country, alleged former prime minister and senior leader of Nepali Congress Sher Bahadur Deuba.

Speaking at a programme in Bardiya on Thursday, Deuba further said that the Maoists were demonstrating unilateral behaviour by not letting the parliament pass the budget for the fiscal year 2009/10. He also accused the Maoists of inviting economic crisis by obstructing the developmental works. It is very undemocratic to find that the party which calls itself a big party is yet to return the citizens’ properties that they seized during the conflict.