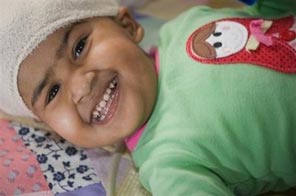 A team of Australian doctors began marathon and risky surgery on Monday to separate a pair of Bangladeshi twins who are joined at the head, giving only a one in four chance of both surviving. Source: AFP

MELBOURNE: A team of Australian doctors began marathon and risky surgery on Monday to separate a pair of Bangladeshi twins who are joined at the head, giving only a one in four chance of both surviving.
The 16-strong team was on "tenterhooks" over the delicate bid to separate Trishna and Krishna, aged two, which will take about 16 hours, plastic surgeon Tony Holmes told reporters at Melbourne'sRoyal Children's Hospital.
"It is a stressful time for any group of surgeons with this sort of case, they only come along really once in a lifetime and I think everybody has been on tenterhooks," he said.
Doctors had already started cutting through the bone which joins the girls via the top of the head and will then separate the connected section of brain and blood vessels, Holmes added.
"The unknown ... is what actually happens when you separate finally the cerebral circulations, because that is a change in haemodynamics (blood movement) so the pressures will be different in each twin," Holmes said.
"It's over those few early minutes when the pressures equilibrate in the brain, they're the things that we're worried about.
"But the children are prepared as well as could possibly be and we're cautiously optimistic that everything is going particularly well."
Krishna was close to death when the twins arrived in Australia in January last year but both are now thriving and have undergone a series of preparatory operations.
The Children First Foundation (CFF) flew the girls to Australia in January 2008 because of poor separationsurvival rates in their native Bangladesh, where only two children have survived four operations in recent years.
Holmes said the children's legal guardian, Moira Kelly, looked "relatively distressed" as Trishna and Krishna were wheeled into the operation.
"When the children went into the operating theatre ... Moira was there giving them, you know, a farewell kiss and good luck," he said.
"She was relatively distressed as one would be if it was your child. The kids were fine, OK, they looked as healthy and happy as anything but they were sedated."
The girls should be apart by 6:00 pm (0700 GMT) and plastic surgeons will then replace the missing bone and skin. The whole procedure is expected to finish at around midnight.
Separating conjoined twins is a notoriously difficult procedure with attempts in Britain and Bangladesh both failing over the past year, although Saudi doctors successfully divided a pair of Egyptian brothers in February.
In one of the best known cases, Singapore doctors in 2003 failed in an attempt to separate adult twins -- Iranian law graduates Laleh and Ladan Bijani, 29 -- who died from severe blood loss after 52 hours of surgery.