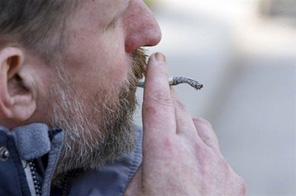 LONDON: British men may be literally dying as a result of their reluctance to see the doctor, researchers said on Monday with a new study showing they are nearly 40 percent more likely to die from any form of cancer than women.
The findings were taken from a study conducted by Cancer Research UK, the National Cancer Intelligence Network (NCIN) and the Men's Health Forum.
They said the disparity could also be down to many men having a less healthy lifestyle than women.
"After taking out the effect of age, men were significantly more likely than women to die from every one of the specific types of cancer considered," said Professor David Forman of the NCIN.
"There's no known biological reason why men should be at a greater risk than women, so we were surprised to see such consistent differences."
But he added: "Men have a reputation for having a 'stiff upper lip' and not being as health-conscious as women. What we see from this report could be a reflection of this attitude."
The study, based on cancer rates and deaths from the disease in 2006 and 2007, showed that men are 16 percent more likely to develop any type of cancer, but 60 percent more likely to develop cancers that can affect both sexes.
Its authors said men needed to be made more aware of the link between a healthy lifestyle and the risk of cancer.
"We know that around half of all cancers could be prevented by changes to lifestyle and it's worrying that this message could be falling on deaf ears for men," said Sara Hiom of Cancer Research UK.
Alan White of the Men's Health Forum said men "are generally not aware that, as well as smoking, carrying excess weight around the waist, having a high alcohol intake and a poor diet and their family history all contribute to their increased risk of developing and dying prematurely from cancer.
"This report clearly demonstrates that a concerted effort needs to be made into getting the public, the health professionals and the policy makers aware of the risks men are facing," he said.