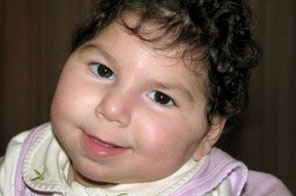 Baby Z' is pictured in Melbourne. The Australian baby has become the first person to be cured of a rare and often fatal brain-poisoning condition thanks to an experimental treatment previously tested only on mice. Source: AFP

MELBOURNE: A "miracle" Australian baby has become the first person cured of a rare and deadly brain-melting condition after doctors gambled on an experimental drug tested only on mice, they said on Thursday.
The child, known only as "Baby Z", was facing a painful death of seizures and brain damage from molybdenum cofactor deficiency, a genetic defect which causes a build-up of toxic sulphite and usually kills in months.
But she made an amazing recovery just three days after first being given the untested treatment which was flown in from Germany and rushed through the courts.
"We are looking at her now and she is just an absolute miracle she has defied everybody," her mother, who cannot be named for legal reasons, told reporters.
Baby Z started having seizures within 60 hours of her birth in May 2008, prompting her family to appeal to biochemist Rob Gianello to help beat the previously incurable condition which affects just one in a million Australians.
"There was courage and there was death we opted for courage," the mother said. "If she wasn't treated she would die a very painful death."
Baby Z's doctor Alex Veldman said Gianello discovered an experimental drug which had been successfully used on mice by Germany's Gunther Schwarz, but had never been tested on humans.
As Schwarz couriered his entire stock of the compound from Cologne to Melbourne, doctors were in a race against time to get ethics approval from the hospital and a court order clearing its use, with Baby Z worsening by the hour.
"The team ... managed to get this therapy from bench to bedside in about two weeks, a process which normally takes several years," Veldman said.
Within hours of receiving her first dose of the drug, cyclic pyranopterin monophosphate (cPMP), Baby Z's sulphite levels plunged by more than two-thirds and were at normal levels within about three days.
Veldman said Baby Z's alertness improved and her twitching slowed rapidly, with her seizures dropping by 90 percent in three weeks.
"The response was just amazing," he told AFP.
"We can treat this in humans for the first time in (the history of) mankind. It has the potential to save lives all around the world."
Baby Z's development has been slowed by the brain damage she suffered before the treatment, and Veldman said she would need a cPMP injection every day for the rest of her life.
But her mother said the baby, now 18 months old, had started speaking and was physically active.
"Every day just gets better and better. We look at her every day and just think, 'Wow'," she said. "(The procedure) was a tiny bit of hope but, when you have nothing, that is a lot of hope."
Veldman said a second child, "Baby P", had since started cPMP treatment in Germany and was "improving rapidly".
The cases were now being analysed ahead of a planned international human trial of the medication at Melbourne's Monash Medical Centre, he said.