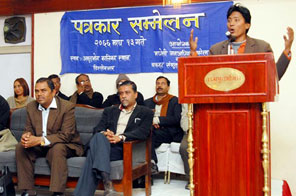 Tharuhat Struggle Committee (TSC) chairman Laxman Tharu speaks in the press conference organised by The Madhesi Janaadhikar Forum Nepal (MJF-N) and the TSC in Kathmandu on Wednesday, January 27, 2010. They decided to stage a joint protest against the draft of the State Restructuring Committee proposing two states and 14 Pradesh. Source: RAJESH GURUNG

KATHMANDU: The Madhesi Janaadhikar Forum Nepal (MJFN) and the Tharuhat Struggle Committee (TSC) on Wednesday decided to stage a joint protest.
The parties are calling the protest against the draft of the State Restructuring Committee.
They alleged that the government is trying to create dispute among the Tharu and and Madhesis communities by proposing two states and 14 Pradesh.

The two parties signed a five-point agreement for the protest.
They demanded an independent state stretching from Jhapa to Kanchanpur but they have decided to name the state later.
Likewise they have agreed to guarantee equal representation in the state organs according to the population of the ethnic community. They also decided to appeal for the complete proportional electoral system, secure the rights of the ethnic groups and finally urged for a mention of the protests of Madhesis as well as Tharus in the new constitution.
As a part of the protest they would present a memorandum of the struggle programme to the Prime Minister Madhav Kumar Nepal and chairman of the Constitutional Assembly Subash Chandra Nembang. They would conduct programmes like interaction, conference and publicity as part of their agitation . They have also warned that they would call a tough programme if their demands in the first phase of the protest are not addressed soon.