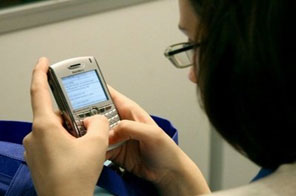 A woman sends text messages in 2008 on her Blackberry phone in Washington, DC. Text HAITI to 90999 or Yele to 501501. Americans are digging deep for Haiti and sending millions of dollars to relief organizations via innovative mobile phone giving campaigns. Source: AFP

WASHINGTON: They were asked to text HAITI to 90999 or Yele to 501501 and in three days, a million Americans pledged millions of dollars in aid to quake-stricken Haiti using their mobile phones.

Donations of 10 dollars a time began streaming in by text message to the special 90999 number set up by the American Red Cross within hours of the powerful earthquake rattling Haiti, and by Friday evening, the pledges exceeded 10 million dollars.

"It has become the single largest mobile donation campaign ever," said the chief US diplomat, who will travel to Haiti on Saturday.

American Red Cross spokeswoman Abi Weaver told AFP that Americans have tapped out rapid-fire donation messages to the relief agency at the rate of about 100,000 dollars an hour.

Her colleague Christi Harlan called the flood of US donations to help victims of Tuesday's powerful earthquake that killed tens of thousands of people and left many trapped under the rubble "amazing, gratifying and very, very needed."

"Somewhere in the vicinity of 350,000 dollars came in the first evening, roughly a million dollars on the second day and another million on Thursday," said Albert Angel, head of Give on the Go, the company running the group's fundraising effort.

By texting "Yele" to 501501, Americans can donate five dollars to help desperate quake survivors in Haiti, and the message can be resent up to six times.

More aid groups are joining the mobile relief effort by the day. Save the Children, UNICEF and World Vision were poised to enlist Friday, and on Monday, another group of "very large charities will be added," said Jim Manis, head of the Mobile Giving Foundation.

Manis, who has been credited with starting mobile giving and whose group coordinates the US text-to-give campaign, first tested texting for a cause after the Asian tsunami in 2004.

That effort raised 150,000 dollars -- a sum long since exceeded by the Haiti quake mobile relief effort. But it also gave new impetus to a phenomenon Manis calls "grassroots philanthropy."

"These are emotional events and people want to reach out and help but sometimes they can't -- they don't have a credit card or they forget to write a check or go online to make a donation," he said.

"The immediate nature of mobile allows for that impulse action to occur. That's what we're seeing with Haiti and we're seeing it translate into new demographics and new people who are supporting emergency relief efforts."

In theory, text messages only represent a pledge and don't become a cash donation until mobile phone customers pay their monthly bill.

But mobile phone companies began stepping up to the plate Friday, when Verizon Wireless said it was not waiting for the billing cycle to run its course and had transferred nearly three million dollars in funds to the American Red Cross.

"Time is of the essence and it makes sense for us to toss aside our normal financial processes to get money where it can do the most good, in the fastest way possible," Verizon president Lowell McAdam said in a statement.

Verizon noted that it can take between 60 and 90 days for a charity to receive a donation from the time a wireless user texts a donation.

The influx of text messages is showing no signs of slowing, said Manis.

"The Yele Foundation is getting 10,000 contributors an hour," he said.

"Every time someone like Wyclef Jean or Bill Clinton appears and talks about Haiti, there's a huge increase in giving. And with the addition of new charities, my guess is you'll continue to see donations rise."

Hillary Clinton, meanwhile, thanked Americans for their generosity and asked them to "please keep texting."

"The devastation is far greater than we could have imagined," she said.