Monkey malaria strain can be fatal in humans: study 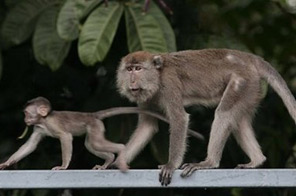 Monkeys are seen at Bukit Nanas Forest Reserve in Malaysia. Researchers in Malaysia have confirmed that a form of malaria thought to primarily affect monkeys can infect and kill humans, according to a new study. Source: AFP

WASHINGTON: Researchers in Malaysia have confirmed that a form of malaria thought to primarily affect monkeys can infect and kill humans, according to a study published in Clinical Infectious Diseases journal.

The study, financed by UK charity the Wellcome Trust, examined the clinical and laboratory features of the P. knowlesi strain of malaria, which until recently was thought to predominantly infect monkeys in Southeast Asia.

Researchers led by professors Balbir Singh and Janet Cox-Singh of the University Malaysia Sarawak found that the malaria strain was widespread among humans in Malaysia and neighboring countries.

Their research confirmed that P. knowlesi is a fifth strain of malaria that can prove fatal in humans, unlike a similar but usually benign strain called P. malariae.

"P. knowlesi malaria can easily be confused with P. malariae since these two parasites look similar by microscopy," Singh said. "In fact, because the P. knowlesi parasites reproduce every 24 hours in the blood, the disease can be potentially fatal."

"Understanding the most common features of the disease will be important in helping make this diagnosis and in planning appropriate clinical management."

The researchers collected data for the study from a group of 150 patients admitted to the Kapit hospital in Sarawak who tested positive for malaria.

Using molecular detection methods, the team found P. knowlesi was the most common form of malaria, accounting for more than two-thirds of the cases.

Most of those infected with the strain were easily treated with chloroquine and primaquine, two common anti-malarials, but one in ten of the patients developed complications, and two died, the study said.

Overall, the researchers measured a fatality rate of just under two percent, making P. knowlesi as deadly as the P. falciparum malaria strain -- considered the most dangerous form of malaria.

But the researchers stressed it was hard to determine the accuracy of their recorded fatality rate because of the relatively small number of cases studied so far.

The study also found that patients infected with the P. knowlesi strain had consistently and significantly lower blood platelet counts than is usually the case among malaria victims.

"Clinicians assessing a patient who has visited an area with known or possible P. knowlesi transmission should be aware of the diagnosis, clinical manifestations, and rapid and potentially serious course of P. knowlesi malaria," he said.

#Monkey malaria strain can be fatal in humans: study
Stay in touch!