Mr Gay contenders on parade in first for China 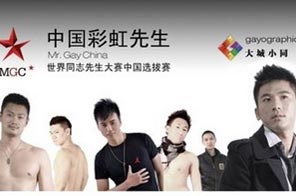 Promotional flyer with the contestants taking part in the Mr Gay China competition -- which organisers say will include an underwear show and a Q&A session -- in a bid to represent the Asian giant at the Worldwide Mr Gay pageant in Norway next month. Source: AFP

BEIJING: Eight Chinese men will strut their stuff in front of hundreds of people Friday at China's first gay pageant, in a sign of new openness about homosexuality in a nation where it remains largely taboo.
The contestants are taking part in the Mr Gay China competition -- which organisers say will include an underwear show -- vying to represent the Asian giant at the Worldwide Mr Gay pageant in Norway next month.
"If the winner is some guy who is masculine, caring and a responsible person, this image will help society," Jiang Bo, 29, one of the contestants from southwestern Sichuan province, told AFP.
"Lots of people have misunderstandings about gay people, they think gay people are sissies and feminine. But it's not true -- some of them are very straight-acting, they're totally responsible just like straight men."
Jiang, a member of the Tujia ethnic minority, says he entered the contest as a personal challenge, but there could be higher stakes.
He has not yet come out to his family, and said he hopes they won't find out because of the pageant, which is being staged at a Beijing club and is being covered mostly by foreign media, according to organisers.
"It would be so embarrassing to the whole family -- they would lose face because their son is gay," he said.
Jiang's comments echo the feeling of other homosexuals in China who find it difficult to come out to their friends and family, although many say the situation has improved over the past few years, especially in big cities.
One problem lies in the nation's one-child policy, which makes parents rely on their only child to marry and produce grandchildren.
According to Chinese experts cited in press reports, there are an estimated 30 million homosexuals in China, two-thirds of them men.
Homosexuality was a crime in China until 1997, and it was officially considered a mental illness until 2001. Since then, however, an increasing number of visible gay and lesbian events has taken place.
Last June, China's first gay pride festival was held Shanghai, albeit in a very discreet fashion and with some events cancelled at the last minute by the authorities.
"Although participation in these events is limited... the news spreads widely in Chinese cyberspace and through print media," said Patrick Bao, a PhD student at the University of Sydney who is researching gay culture in China.
"Those events have had a huge impact on gay people in China. They seem to be quite inspired and encouraged by them," said Bao, himself a Chinese gay man.
In recent weeks, signs have emerged that homosexuality in China is gradually becoming more accepted.
The official English-language China Daily newspaper splashed a photo of the nation's first publicly "married" gay couple on Wednesday. Same-sex marriages or civil unions, however, have no legal basis.
And last month, China's first government-backed gay bar opened in the tourist town of Dali in the southwestern province of Yunnan in a bid to boost HIV/AIDS prevention efforts.
According to Bao, China has one advantage in that it does not have religious barriers to homosexuality like some Western countries, but sexual taboos remain a problem.
"Many people, especially the older generation, still consider talking about sex and not abiding by social and sexual norms to be shameful, and this shame culture is as insidious as the religious reasons," he said.
And whereas gay bars and clubs are tolerated in big cities, government authorities are sometimes still jittery.
According to the China Daily, for example, more than 100 gay men in the southern city of Guangzhou protested in August against attempts by police to push them out of a park over allegations of petty crime.
Ben Zhang, the organiser of Mr Gay China, initially expressed apprehension about possible government intervention ahead of the pageant, but the event received coverage in state media outlets, indicating it would likely go ahead.
Zhang said he hoped the contest would help raise awareness about the country's gay community.
"I expect the pageant will encourage those who are in their shell to be more comfortable with their sexuality," he said.
Jiang, however, said he would not come out to his parents even if he won.
"But if they find out, I will not deny it," he said. "Let destiny lead me."

#Mr Gay contenders on parade in first for China
Stay in touch!