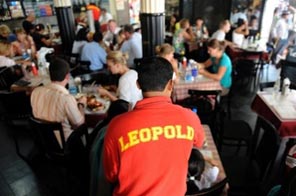 Customers at Leopold's cafe in Mumbai on November 5. Eight people, including two members of staff, were killed by militants at the restaurant, which reopened only 24 hours after the nearby Taj Mahal Palace and Tower hotel was declared safe. Source: AFP

MUMBAI: Life was very different for Sadashiv Chandrakant Kolke 12 months ago. He worked at a small restaurant in Mumbai and had a regular income, most of which he sent home to support his family.
But everything changed on November 26 when he took a friend to the city's main railway station, just as two men walked on to the concourse and began firing indiscriminately with AK-47 assault rifles and lobbing hand grenades.
The 39-year-old was one of more than 100 people injured at the Chhatrapati Shivaji Terminus. Fifty-two people lost their lives in the hail of bullets.
"I was amongst the first to be hit," Kolke told AFP, pointing to a scar on his neck.
"I am not sure what happened after that. It's like a blur. I fell down and feared I would not live. All I did was take God's name. I blanked out after that."
The attacks, which claimed 166 lives across Mumbai, saw Kolke spend six weeks in hospital before he went to his village near Kolhapur, in the centre of western Maharashtra state, to recuperate.
On his return to Mumbai, he found he had lost his 3,500-rupee (76-dollar) a month job.
Now he lives on the street and makes tea at a roadside stall, which brings him only two-thirds of his previous salary.
Most of the 100,000 rupees' compensation he was given paid the hospital fees. The remainder went to his wife, two children and ailing father.
Leaving Mumbai, though, is not an option: his family needs money as this year's drought and floods ruined the crops on their smallholding and Kolke is getting demands to repay a housing loan.
"Things have been difficult after not having a steady job," he said. "I'm not angry, just sad and helpless faced with what happened. My life has changed... I am trying to put things back into shape here in Mumbai."
Kolke's plight contrasts starkly with the scene at the Leopold Cafe across the city, where locals and tourists relax over food and drink during a mid-week lunch hour.
Eight people, including two members of staff, were killed by militants at the restaurant, which reopened only 24 hours after the nearby Taj Mahal Palace and Tower hotel was declared safe.
"Leopold's is the same," said co-owner Farzad Jahani, smiling as he looked at the packed restaurant, which has long been a favoured haunt for backpackers.
Apart from the bullet and splinter marks that Jahani refuses to repair, "nothing has changed since 26/11," he added.
The 46-year-old restaurateur -- who has continued to pay the salaries of his fallen staff to their families -- is defiant.
"I always say that they (extremists) are a handful and we are a lot. We are the happy ones and they are the sad ones. They have nothing to live for. We have everything to live for," he explained.
"We won't be doing anything specific" on the anniversary, he added. "There's nothing to rejoice or be happy about.
"Many of the customers who were there on that particular night say they will be coming. They want to be part of Leopold's."
Divya Salaskar was at home when she found out from the television news that her police marksman father, Vijay, had been killed by the same gunmen whose bullets injured Kolke.
His police jeep came under fire as the gunmen fled the station. The head of the Mumbai anti-terrorism squad, who was in the vehicle, was also killed.
"I thought it was a mistake. It was something really difficult for me to believe because I had come to believe he was bullet-proof... I can still see the strip (on the television) going in front of my eyes every day," she said.
The 21-year-old still picks over the night's events and says messages of support, including from strangers, have helped, but she is still angry.
"It's quite disheartening that 10 people walk into the country and randomly shoot people and cause so much mayhem and bloodshed. Nobody deserved all of this," she said.
"I think a year after I can still feel the pain, the same pain that was there a year back. And I don't think this pain will ever die. Every 26th it will be there until and unless those people are severely, severely punished."
Divya will be studying in London on November 26 and expects only a day of quiet reflection.
"I'll just want to remember my father. For me, I call him a martyr. Others call him a hero. On that particular day also I would like to remember him as my father, my friend," she said.