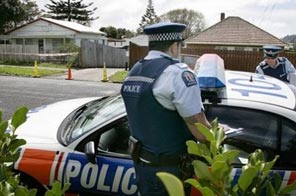 Police are seen on a patrol in Auckland. Source: AFP

WELLINGTON: New Zealand police are getting hot under the collar over emergency calls including a woman whose husband didn't spray air freshener after using the toilet and another complaining of pressure to attend a family wedding.
The Dominion Post newspaper reported Saturday that police in the North Island town of Wairoa responded to an emergency call from a 51-year-old woman who hung up after police answered the phone.
When police arrived at her house, she complained her husband had forgotten to spray the toilet with air freshener after a visit, police said.
The police restored harmony in the household and did not lay charges over the call.
"It's pathetic really, someone dialling 111 (the emergency number) for something like that," Wairoa polce sergeant Aubrey Ormond said.
A day earlier police in the southern city of Christchurch responded to an emergency call from a woman who demanded police help to get her sister-in-law off her back.
She said the sister-in-law was pressuring her to attend a family wedding.