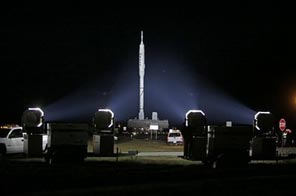 The 327-foot-tall Ares I-X test rocket moves slowly to launch pad 39B from the Vehicle Assembly Building at the Kennedy Space Center in Cape Canaveral, Fla., Tuesday, Oct. 20, 2009. The Ares 1-X is scheduled to launch on Oct. 27. Source: AP

CAPE CANAVERAL: NASA's lofty new rocket arrived at the launching pad Tuesday for a test flight next week that comes at a time when the future of the country's spaceflight program is up in the air.

It's the first time in 34 years that a rocket other than the space shuttle has stood at Launch Pad 39-B. NASA modified the pad for this rocket, which is supposed to eventually carry astronauts to the moon.

But the White House may scrap those plans. A panel of aerospace experts that provided President Barack Obama with a list of possible exploration options is issuing its final report later this week.

The experimental Ares I rocket — taller than the Statue of Liberty — spent all night traveling from the hangar to the pad. The four-mile trip took more than seven hours.

The test vehicle will blast off next Tuesday on a 2 1/2-minute ballistic flight to demonstrate how the partial first stage performs. It's costing NASA $445 million.

Thin and exceptionally tall at 327 feet, the Ares I-X looks like what will carry astronauts into orbit, possibly by 2015. But much of it is a mock-up, and no person or payload will be on board.

Shuttle program manager John Shannon said the Ares I-X is safe enough to launch even though Atlantis is just 1 1/2 miles away on the other pad. The impact zone if there is a launch explosion "just barely clips by" the pad holding Atlantis, he said.

He noted that there's proven technology in the Ares' first-stage booster. It's the same type of solid rocket booster used to propel space shuttles.

The booster will parachute into the Atlantic and be retrieved for analysis. The rest of the rocket — all false pieces weighted with ballast — will crash, uncontrolled, into the ocean.

The rocket is rigged with hundreds of sensors.

"My personal opinion is that if we really thought that I-X was going to have a problem, that we're not ready to launch it, even on a test flight," Shannon said late last week.

Atlantis, meanwhile, is scheduled to lift off Nov. 16 on a delivery mission to the International Space Station. On Monday, NASA delayed the shuttle flight four days to improve the chances of launching the Ares I-X next week. The same team at Kennedy Space Center will handle both launches.

"It's neat to see where we're going next, what the next step will be, and that when we stop flying the shuttle at some future point, that it's not the end, but we'll have the beginning," Atlantis' commander Charles Hobaugh said from the shuttle pad.

Six shuttle flights remain, all to the space station, and should be completed by the end of next year.