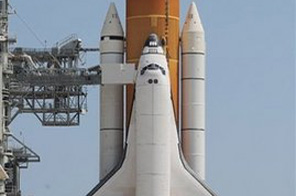 US space shuttle Endeavour sits on the launch pad at Kennedy Space Center in Florida on June 13. Source: AFP

WASHINGTON: NASA was on course to finish repairs to launch the shuttle Endeavour on Wednesday after its scheduled mission to the space station last week was postponed because of a gas leak.

"We're inside 24 hours of launch attempt number 2," the crew's commander, Mark Polansky, wrote on Tuesday on the micro-blogging website Twitter.

The next attempted blast-off for shuttle to the International Space Station was set for 5:40 am EDT (0940 GMT) on Wednesday from NASA's Kennedy Space Center in Florida, the US space agency said in an earlier statement.

The hydrogen gas leak in one of Endeavour's venting systems was detected just hours before the shuttle's planned launch at the weekend -- the system in question was supposed to carry excess hydrogen safely away from the launch pad.

NASA technicians, the agency said, were on course to complete repair work by 3:00 pm (1900 GMT) Tuesday.

The launch forecast was good, officials added, with an 80 percent chance of favorable weather expected.

"Our teams have been working very hard over the last couple of days to get this piece of equipment fixed," said NASA Test Director Steve Payne during a briefing Monday on the repair job.

"Endeavour is in good shape and the teams are excited to be back to working toward a launch on Wednesday morning," he said.

The shuttle's new target date caused a scheduling conflict since NASA had a planned liftoff on the same day for the moon-bound crater observation and sensing satellite (LRO/LCROSS), which now has been pushed back one day, to June 18.

LRO is scheduled for a one-year exploration mission at an orbit of about 31 miles, or 50 kilometers -- the closest any spacecraft has orbited the moon in preparation for future lunar travel.

The partner mission LCROSS, meanwhile, will hurl itself into a crater on the dark side of the moon in search of long-frozen remnants of water ice, something that may prove crucial to future manned missions to the natural satellite.

Shuttle launch director Pete Nickolenko said Sunday the root cause of the leak in Endeavour's external fuel tank had not yet been determined, but said the team was confident of the integrity of the repair.

When Endeavour lifts off Wednesday from NASA's Kennedy Space Center in Florida, it will be the 32nd mission to the ISS, which orbits 350 kilometers (220 miles) above Earth, and the last of three missions to assemble the Japanese Kibo laboratory aboard the orbiting space station.

During the shuttle's stay the ISS is set to be a temporary home to 13 astronauts -- the first time so many people have stayed on the orbiting station at once.

The six US astronauts and a Canadian woman astronaut that Endeavour is expected to bring to the ISS will join another US astronaut and one more from Canada, as well as two Russians, a Belgian and Japan's Koichi Wakata who are currently living on the ISS.

Construction began on the ISS a decade ago, and the push is on to complete the building before NASA ends its shuttle missions in September 2010.

Over the five planned spacewalks lasting some 32.5 hours, the astronauts will install a permanent 1.9 tonnes platform to Kibo, which will serve as one of the station's porches for conducting experiments in the vacuum of space.