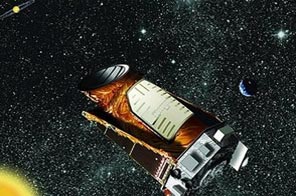 This artists impression of the Kepler spacecraft. Source: AFP

WASHINGTON: NASA's Kepler space telescope has discovered five new planets beyond the solar system, the US space agency said, just 10 months after Kepler launched into space to find Earth-like planets.
The discovery of the five planets "contributes to our understanding of how planetary systems form and evolve from the gas and dust disks that give rise to both the stars and their planets," NASA's William Borucki, principal science investigator for the Kepler mission, said in a statement.
But all five exoplanets are "too hot for life as we know it," NASA said.
The newly discovered planets are known as "hot Jupiters" because of their large masses and extreme temperatures, which range from 2,200 to 3,000 degrees Fahrenheit (1,204 - 1649 degrees Celsius) -- hotter than molten lava.
Their orbits last between three and five days, meaning they follow paths close to their stars, which are hotter and larger than the Earth's sun, NASA said.
The smallest of the newly discovered planets is roughly the size of Neptune, the fourth largest planet in Earth's solar system, and the biggest is around the size of Jupiter, the largest planet in our solar system.
One of the planets, which have been given the unimaginative names of Kepler 4b, 5b, 6b, 7b and 8b, is similar in many ways to Neptune, although its irradiation level is much higher.
Another planet is one of the least dense ever discovered, and along with the other three, confirms the existence of planets with densities substantially lower than those predicted for gas giant planets.
The five exoplanets were among discoveries made by the Kepler space telescope in the first six weeks after it became operational in May last year.
Borucki presented the early discoveries and other findings at a meeting of the American Astronomical Society in Washington on Monday.
Kepler looks for the signatures of planets by measuring dips in a star's brightness which are caused by planets crossing in front of them and periodically blocking out part of the starlight.
The size of the planet can be derived from the size of the dip in brightness while the temperature can be estimated from the characteristics of the star it orbits and the planet's orbital period.
Kepler is NASA's first mission in search of Earth-like planets orbiting suns similar to ours.
It launched in March last year, equipped with the largest camera ever sent into space -- a 95-megapixel array of charge-coupled devices -- and is expected to continue sending information back to Earth until at least November 2012.
It is searching for planets as small as Earth, including those orbiting stars in a warm, habitable zone where liquid water could exist on the surface of the planet.
"The Kepler observations will tell us whether there are many stars with planets that could harbor life or whether we might be alone in our galaxy," said Borucki.
Because planets in the habitable zone of sun-like stars only pass in front of their star about once a year, and three transits are required before a "discovery" can be confirmed, finding an Earth-size planet is expected to take at least three years, NASA said.
Jon Morse, head of the astrophysics division at NASA headquarters in Washington, said scientists had expected that Kepler would find massive planets in short orbits before it found smaller, earth-like planets.
But, he added, it was "only a matter of time before more Kepler observations lead to smaller planets with longer period orbits, coming closer and closer to the discovery of the first Earth-analog."
Kepler has already pleasantly surprised scientists by sending back images of a "hot Jupiter" 1,000 light years (around 5.9 quadrillion miles, 9.5 quadrillion kilometers) from Earth that it took when it was still in calibration mode, just 10 days after it launched.