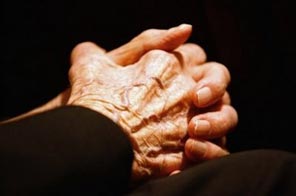 The hands of an elderly person. Scientists working in seven countries announced they had uncovered variants of three genes which play a role in Alzheimer's, a discovery that should throw open many new avenues for tackling this tragic, mind-killing disease. Source: AFP

PARIS: Scientists working in seven countries announced they had uncovered variants of three genes which play a role in Alzheimer's, a discovery that should throw open many new avenues for tackling this tragic, mind-killing disease.

The biggest cause of dementia, Alzheimer's has a strong heritability -- nearly one in four cases are believed to have a genetic cause -- but precisely which genes are to blame and how their fiendish mechanism works remain elusive.

So far, three culprit genes have been found in "familial" Alzheimer's, a rare, early-onset form in which the disease shows up before the age of 60. This type accounts for less than three percent of all cases.

Of the far more common "sporadic" type, where there is no readily identifiable family history of the disease, just a single gene, APOE4, has come to light -- and it was spotted way back in 1993.

But hopes are now rising that a few of the many knowledge gaps may now be filled.

In two papers published in the journal Nature Genetics, a team based in Britain and the other in France report that a trawl through the DNA of 36,000 individuals has added three new genes, whose tell-tale variants showed up among people with Alzheimer's.

That finding could be useful in the search for a diagnostic tool, helping people with a heightened susceptibility to Alzheimer's make lifestyle decisions, even if a cure for the disorder remains beyond the far horizon.

Farther afield, it could help tease out a pharmaceutical weapon to interfere with the action of the faulty genes.

In Alzheimer's, clumps of protein called amyloid plaques and tau tangles proliferate in the brain, especially the cortex and hippocampus, destroying brain cells and their connections.

The role of the three newly-identified genes remains unknown.

Two of them, called CLU and CR1, may be involved in the elimination of amyloid plaques, so faulty variants may allow the toxic compound to build up, the scientists believe.

The other, called PICALM, controls brain chemicals that are important at synapses -- the connection between neurons -- and is involved in the transport of molecules into and inside nerve cells, thus helping to form memories and other brain functions.

"These findings are a leap forward for dementia research," Rebecca Wood, chief executive of the Alzheimer's Research Trust, a British charity that funded research encompassing universities in Britain, Belgium, Germany, Greece, Ireland and the United States.

"At a time when we are yet to find ways of halting this devastating condition, this development is likely to spark off numerous ideas, collaborations and more in the race for a cure."

The other paper was authored by a team from France's National Institutional of Health and Medical Research (Inserm).

The team "has about 10 other genes that may be possible targets" but further work is needed to confirm this, lead researcher Philippe Amouyel, of the Institut Pasteur in Lille, told AFP.

There is no cure at present for Alzheimer's, although some researchers are confident that a first generation of drugs that will slow or block the spread of the disease is not far away.

Present drugs have only a temporary effect. They inhibit an enzyme that reduces acetylcholine, a vital chemical used in communication between brain cells.

A breakthrough is urgently needed.

According to an estimate published by the journal The Lancet in December 2005, the number of people with dementia will more than triple by 2040, reaching 81 million. China and South Asia will see the biggest increases.