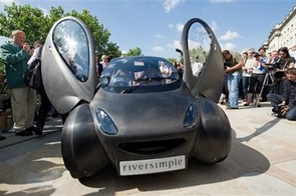 The RiverSimple urban car outside Somerset House in central London. A new hydrogen car designed for use in cities and backed by a relative of the founder of German luxury sportscar maker Porsche has been unveiled in London. Source: AFP

LONDON: A new hydrogen car designed for use in cities and backed by a relative of the founder of German luxury sportscar maker Porsche was on Tuesday unveiled in London.
The two-seater Riversimple Urban Car can travel 240 miles without refuelling, weighs just 350 kilogrammes (770 pounds) and has a top speed of 50 miles per hour.
In fuel efficiency terms, it can do the petrol equivalent of 300 miles per gallon and emits only water. Manufacturers hope it could go into production from 2013.
The cars will be leased to owners for a reported 200 pounds per month rather than sold, as part of a package including maintenance, support and fuel.
The project involves Sebastian Piech, a great-grandson of Ferdinand Porsche, who founded the famous German car company in the 1930s.
Piech said the car represented a "major step... towards the fulfilment of my great-grandfather's ambitions for accessible personal transport but this time combining his other passions: light weight and high efficiency".
He is executive director of a firm which works on hydrogen fuel cells which has helped to develop the cars over the last three years.