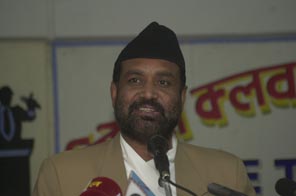 JANAKPURDHAM: The activities of UNMIN shows that they are biased and working in favour of the main opposition UCPN-Maoist, senior leader of Nepali Congress Bimalendra Nidhi on Saturday made the accusations.


Addressing a programme at Jaleshwor in Janakpur Nidhi further said the controversial video tape of UCPN-Maoist chairman Pushpa Kamal Dahal was evidence of the fact that UNMIN is biased. He described the protest programmes of the UCPN-Maoist as an outcry for power lust and not for the reinstatement of civilian supremacy. He also accused the opposition party of being involved in the government toppling game.


Minister for Sports Ganesh Nepali, the other speaker of the programme, said that he sees no significance of the protest programmes launched by the Maoists in the present context. The protests only helps to deepen more political crisis in the country and end the culture of consensus, added Nepali. He suggested that the Maoists quit House obstruction as it had created a condition of confusion in the country.