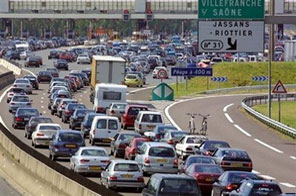 Traffic jam seen in France. Half of urban Europe endures noise pollution from road that are loud enough to disrupt sleep and trigger hypertension, according to a report released Monday Source: AFP

PARIS: Half of urban Europe endures noise pollution from road, rail and air traffic loud enough to disrupt sleep, impair learning and trigger hypertension at night, according to a report released.
More than 41 million people in cities of at least 250,000 people from 19 countries that submitted road transport data to the European Environment Agency (EEA) deal with road racket averaging 55 decibels or higher the World Health Organization threshold for health impacts.
Among capital cities, Bratislava is the noisiest, with nearly 55 percent of the population thus exposed, followed closely by Warsaw and Paris, the EAA reported.
Some 3.6 million urban dwellers cope with an ear-splitting levels of 70 decibels or higher.
Many European Union countries including France, Portugal, Belgium and Greece -- failed to provide complete data before a December 2007 cut-off date, leaving major gaps in the transport noise database published online Monday (http://noise.eionet.europa.eu/index.html).
But earlier this year the EEA estimated that some 67 million urbanites in the 27-nation European Union are confronted with noise levels above the 55 decibel mark.
"Besides disturbing sleep, there is increasing evidence that transport noise can effect the cadiovascular system, mental health and school performance," said Oscar Romero, a spokesman for the Copenhagen-based EU agency.
Noise has gotten a "late start" compared to other forms of pollution, both in terms of regulation and public opinion, he said.
"If you compare the level of awareness about air quality or greenhouse gas emissions to noise, I think we are still at an early stage," he commented by telephone.
Scientists have also been slow to focus on how constant noise levels influence mental and physical health, as well in the classroom and the workplace, he pointed out.
Air traffic noise pollution is affects a large number of people in the Netherlands, Germany and especially Britain, where more than 800,000 people are exposed to steady decibel levels ranging from 55 to more than 75.
"We also have studies piling up about how noise is affecting wildlife," Romero said.
In 2002, the EAA's 32 members adopted the Environmental Noise Directive, pledging to provide standardised data on noise levels from road, rail and air transport.