Nokia strikes back against 'smart' rivals 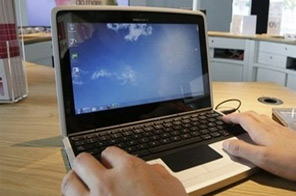 A visitor checks out Nokia's first notebook, the "Booklet 3G" at the "Nokia World 2009" in Stuttgart. Faced with increased competition from up-and-coming rivals, Finnish telecom giant Nokia plans to launch a slew of new products this year but analysts say it faces a tough battle to hold on to its position as the world's number one mobile phone manufacturer. Source: AFP

HELSINKI: Faced with increased competition from up-and-coming rivals, Finnish telecom giant Nokia plans to launch a slew of new products this year but analysts say it faces a tough battle to hold on to its position as the world's number one mobile phone manufacturer.

To fight back against Apple's iPhone and RIM's Blackberry, Nokia announced plans to launch three new smartphones with touch screens, a portable notebook PC, and will tie up with Microsoft to use its popular Office software on its handsets.

Industry observers criticised the Finnish giant for its aging product lineup and for not bringing smartphones to market quickly enough to take on their up-and-coming rivals.

Analysts interviewed by AFP agreed that Nokia had not yet found a product to challenge the iPhone as most new Nokia devices use an outdated operating system to drive their phones.

"It is going to be 2011 before they have the right software to make a really competitive product," Richard Windsor, a London-based technology analyst for Nomura Securities, told AFP.

Its latest smartphone, the N97, has achieved modest sales so far compared to the iPhone.

Technology consultancy Gartner estimates Nokia has sold just 500,000 of them worldwide since its launch in June. Apple's new third-generation iPhone sold one million units in its first weekend on sale.

Nokia needs its new models to be a success smartphones, handsets with high-speed internet access, are the fastest growing segment in the mobile phone market and their higher price tags mean they carry higher profit margins than cheaper, more basic models.

The Finnish giant's share of this lucrative segment has ebbed away in recent months. In the second quarter of 2009, it sold 45 percent of all 40 million smartphones sold worldwide.

That compares to 47.4 percent of 32 million handsets at the same time last year, according to Gartner data.

"The right high-end product and an increased focus on services and content are vital for Nokia if it wants to both revamp its brand and please investors," wrote Gartner analyst Carolina Milanesi in a research note to clients.

In addition to its partnership with Microsoft, Nokia will also use Linux software and work with social networking site Facebook to develop new services.

"They have realised that for certain things it makes sense to partner," Ben Wood, research director at CCS Insight, told AFP.

Apple also beat Nokia in drawing in additional revenue from the sale of online applications: ringtones, videos, games and other Internet gadgets.

Its App'Store went online in July 2008 while Nokia's Ovi store launched in May this year.

"Nokia cannot create one killer product to beat Apple or Google. Nokia has to create an experience or a solution that is so compelling that a consumer says 'I like the whole proposition'," said Wood.

Nokia's chief executive Olli-Pekka Kallasvuo told reporters on Wednesday that these add-on services were "critical to our future" and that his company wanted to make smartphones more affordable to a wider range of people.

But that will be a hard sell in the current economic climate.

Nokia, which has 1.1 billion customers worldwide, posted a 66-percent drop in net profit in the second quarter of 2009 and a nearly 25-percent decline in revenues on a 12-month basis.

In a bid to restore the company to profitability, a cost-cutting programme was launched in January aimed at reducing Nokia's workforce by some 4,000.

#Nokia strikes back against 'smart' rivals
Stay in touch!