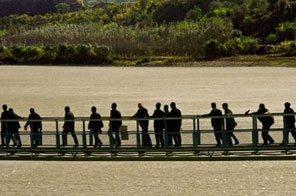 BEIJING: A burst oil pipeline in north China has spewed thousands of gallons (litres) of diesel into a major tributary of the Yellow River, state media said Sunday.

The spill occurred on Wednesday last week on the Chishui river in Shaanxi province when a pipeline operated by the China National Petroleum Corporation (CNPC) ruptured, a statement on the Weinan city government website said.

Emergency measures have been taken to stop the leak, with 23 containment belts set up downstream from the spill and up to 700 people scrambling to clean up the mess, the statement said.

Local government officials refused to reveal how much diesel had spilled into the river or comment on the spill when contacted by AFP.

The official Xinhua news agency reported that up to 150,000 litres (40,000 US gallons) had leaked into the river about 70 kilometres (42 miles) from the Yellow River, one of China's longest watercourses.

Oil has already been detected 33 kilometres downstream from the spill, the report said.

"We must take thorough measures to handle the spill and the pollution and strictly prevent it from entering the Yellow River, while ensuring the safety of drinking water," the Chongqing Evening News quoted Vice Premier Li Keqiang as saying.

Local environmental departments have warned residents not to use the river water as it may be polluted, the report said.

A preliminary investigation showed that the pipeline rupture was caused by a local construction project, CNPC, one of China's biggest state-owned oil and gas companies, said in a statement.

The pipeline is used to transport diesel from northwest China's Gansu province to the central parts of the nation, it said.

Around 30 years of unbridled economic growth have left most of China's lakes and rivers heavily polluted while the nation's urban dwellers also face some of the world's worst air pollution.

More than 200 million Chinese currently do not have access to safe drinking water, according to government data.

In November 2005, a major oil spill on the Songhua river in northeast China's Heilongjiang province resulted in a cut off of water supplies to up to four million people in the provincial capital of Harbin before flowing down river into Russia, causing a diplomatic crisis.