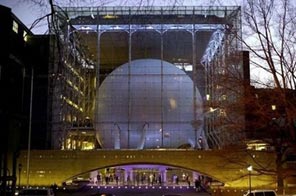 The spherical Hayden Planetarium sits within the Rose Center for Earth and Space at the American Museum of Natural History in New York. Source: AFP

NEW YORK: A New York opera will have a few more stars this month when it performs at the planetarium in New York's Museum of Natural History.
The Gotham Chamber Opera will stage Joseph Haydn's work "Il Mondo della Luna" ("The World on the Moon") starting January 19 in the Rose Center for Earth and Space, part of the famous museum off Central Park in Manhattan.
A spokeswoman for the museum, Ellen Evaristo, said it was "probably the first time an opera has been performed in a planetarium."
Opera goers and space buffs will get "an out of the world experience," Evaristo said, promising "live opera and stargazing using the 180 degree dome with projections courtesy of NASA."
By coincidence the planetarium is named after Charles Hayden -- not a composer, but a US financier a century ago.

#NY opera to star in planetarium production
Stay in touch!