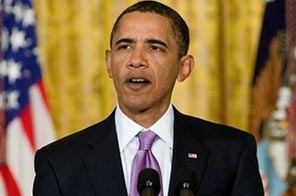 WASHINGTON: US fans of the show 'Lost' can breathe a sigh of relief Friday after the White House pledged a key speech by President Barack Obama won't displace the premiere episode of the show's final season.
"I don't foresee a scenario in which the millions of people that hope to finally get some conclusion in "Lost" are preempted by the president," White House spokesman Robert Gibbs reassured the viewing public at a White House press briefing.
US television station ABC has set aside a three-hour block on the evening of February 2 to show the first episode of the wildly popular show's last season.
But fans feared that President Barack Obama might choose to give his first State of the Union address, which is traditionally delivered on the last Tuesday of January, on the same day.
Most US television stations agree to set aside their previously-scheduled programming to give the president a national platform for his speech to a joint session of Congress.
Gibbs sought to allay those fears Friday, in response to a question from a journalist from ABC's news program.
Since it began in 2004, the suspense-filled "Lost" has introduced millions of viewers to a group of travellers stranded on a mysterious island after a plane crash.
The show is the brainchild of J.J. Abrams, who was also behind the series "Alias" and the most recent "Star Trek" movie.
Gibbs' comments came after "Lost" fans took to the Internet, creating Facebook pages and sending Twitter messages to plead with the White House not to create the scheduling conflict.
The White House declined to say when Obama will deliver the speech, which he will likely use to push for his domestic priority of healthcare reform.