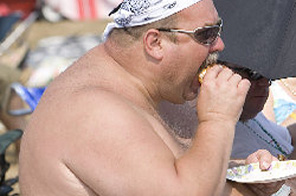 WASHINGTON: It isn't just the thunder thighs that shrink after obesity surgery. Melting fat somehow thins bones, too.
Doctors don't yet know how likely patients' bones are to thin enough to break in the years after surgery. But one of the first attempts to tell suggests they might have twice the average person's risk, and be even more likely to break a hand or foot.
The Mayo Clinic's finding is surprising, and further research is under way to see if the link is real. But with bariatric surgery booming and even teenagers in their key bone-building years increasingly trying it, specialists say uncovering long-term side effects and how to counter them takes on new urgency.
Simply popping today's doses of calcium supplements may not be enough.
"These procedures are now being sold as a panacea," Dr. Shonni Joy Silverberg of Columbia University told last week's annual meeting of The Endocrine Society, where the fat-and-bone relationship took center stage. "It is of heightened importance to find the answers to these questions."
Here's the irony: Obesity actually is considered protective against bone-weakening osteoporosis, possibly the only positive thing you'll ever hear a doctor say about too much fat.
"They're starting better than most of us," cautions Mayo bone-metabolism expert Dr. Jackie Clowes. So the big question is whether they really end up with worse bones, or just go through a transition period as their bones adjust to their new body size.
About 15 million Americans are classified as extremely obese, 100 pounds or more overweight. Dieting alone doesn't make enough of a dent to fend off rampant diabetes and other health problems, so surgery is fast becoming the preferred treatment — from the stomach stapling called gastric bypass to less invasive stomach banding. Patients tend to lose between 15 percent and 25 percent of their original weight, and diabetes dramatically improves.
More than 1.2 million U.S. patients have undergone the surgery in the past decade, 220,000 in the last year alone, according to the American Society for Metabolic and Bariatric Surgery.
There's little data on how patients fare many years later; large National Institutes of Health studies, on both adults and teens, are under way.
But doctors have long noted that the radical weight loss can speed bone turnover until the breakdown of old bone outpaces the formation of new bone. Silverberg cites recent studies showing that a year after gastric bypass, adults' hip density drops as much as 10 percent, raising concern about a common fracture site of old age. (Stomach banding causes less thinning because it doesn't alter nutrient absorption as much.)
No one knows if teen bones react similarly, but it's an important issue because almost half of peak bone mass develops during adolescence.
To see if such changes translate into fractures, the Mayo team is comparing the medical records of nearly 300 adults who've had bariatric surgery with similarly aged Minnesotans who haven't.
A quarter of the 142 surgery recipients studied so far experienced at least one fracture in the following years, Mayo's Dr. Elizabeth Haglind told the endocrinology meeting. Six years post-surgery, that group had twice the average risk. But in a puzzling finding, the surgery recipients had even more hand and foot fractures than their Minnesota neighbors, three times the risk.
Those fractures aren't usually connected to osteoporosis. Did the once-obese merely start exercising and just fall down more? Clowes doubts it.
"I was shocked" at the numbers, says Dr. Scott Shikora, president of the bariatric surgeons group, who says he hasn't seen a significant fracture problem in his own practice.
Surgeons routinely tell patients to take some extra calcium and vitamin D. Shikora estimates about half follow that advice, and other research suggests higher doses may be needed anyway as the obese tend to start out deficient in vitamin D.
A key next step will be to compare the patients who fracture with people of the same weight to see if their bone mass just had to adjust — or if something about surgery alters the complex soup of hormones and other factors that keep bones strong, thus requiring more than extra calcium.
Clowes' advice for now: Don't skip checkups, where doctors monitor bone health, and aggressively treat nutrient deficiencies.